I’m feeling a tad cursed.  Last week, Scott and I planned to take a nice long unsealed backroad which would take us past some nice walks and caches.  However we could only go so far before a large pile of dirt and logs higher than the van impeded our way (they say a bridge was out, but who’s believing THAT story?!).  So our Plan B was to, well, go back the way we came after having a nice walk to a cache.

Today SamCarter, SG-3, and the Marines picked me up to hit School of Rock: Cheat Sheet.  Since we had to drive past another cache on the way, I suggested we drop in on a cache.  The Marines started looking around, SamCarter became fully prepared by reading the description, and SG-3 wondered why the cache wasn’t in his GPSr.  Turns out it’s temporarily archived.  Opps.  To paraphrase SamCarter, rather than making a find they visited the Memorial to the Archived Cache.  Oh well – onwards!

We continued on towards our planned destination, however we got no further than the gate off the main road: Risdon Brook Dam reserve is closed due to flood damage.  Oh.  Ugh.  What was damaged?  How closed?  Luckily SG-3 had a good Plan B suggestion: Zinc Walks. 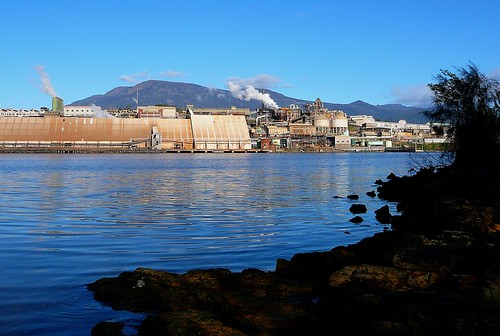 Zinc Walks recently passed its 4th birthday; I logged my find on 6 August 2005 (Back when Snuva was still alive and wrote many of my logs for me).  It was an experience:

Snuva’s Point of View: HUURRUUMPH! Fine for you, DDTs! I’m certain I can find a ‘No Flip the Frog Allowed’ area!!! Just you wait! Found all the required information, but then of course I had to send the female slave in to do battle whilst the male slave and I waited. I’ll let the female slave tell her pathetic story:

The Female Slave’s Point of View: I merrily headed off on the mission Snuva sent me on. I had read the cache listing as well as the logs from those who had come before me (so why are PIGS and not SCHNAUZERS allowed?!) and I wanted to do a good job for my master to prove just how clever a team we are, so I was careful not to leave the track until after I had achieved the top of the hill. Hmmm. . .doesn’t seem THAT easy. How much harder could it have been if I’d left the track earlier? Our first DDT cache so don’t know what their placements are like, but they didn’t look all THAT evil. . .maybe they were just trying to lull us into a false sense of cheeriness by passing around all those frogs. . .maybe these people are evil! All the native wisteria that was looking pretty earlier in the walk is actually EVIL and trying to bind my ankles. . .damn trees and geological features. . .NOT ANOTHER POINTED STICK!. . .within 80m and keep losing the signal. . .WHY would you put a cache here and how could leaving the track earlier have made it any more difficult!!! I’ll see if I can get a signal up there. . .marginally better – I’d give up but Snuva sharpened her teeth recently and I don’t fancy dealing with her if I come back with a DNF. . .hmm slightly better signal and I seem to be close although GZ won’t settle. . .ggrrrrhhh, THERE it is! Better grab that ball to appease Snuva after her LONG wait for me; I’ll leave Neville here as he’s close-ish to water (and I keep forgetting him whenever I’m near a good water cache!). Now, those DDTs didn’t look evil. . .bet there’s a track up here somewhere. . .aahhhh! So, don’t leave the track until after you summit and follow 2 other tracks and get within 70m of GZ!!!

The Male Slave’s Point of View: Well, if she’s not back by 3pm and I have to call the police, at least one of the officers will know where she’s gone! Wonder if they will think it’s a prank call when I ask for Senior Constable Cheesy Pig?!

So I was looking forward to being able to not only do the walk again but also to give my friends the benefit of my experience so their walk was a bit easier!  There was a slight blip at the beginning of the walk – being an old-fangled cache it didn’t child waypoints, so we’d headed off before realising there was more information to be gathered.  But The Marines quickly found the info and GPSrs were updated.  As we hit the track again, disaster almost struck again!  While the rest of us were looking at the view, SamCarter was negotiating a slippery downhill when an STW run under her feet and tripped her up!  Thankfully she wasn’t injured, but I used the ‘sit and slide’ method of coming down that bit to ensure the STW couldn’t trip me up.  We would need to be careful; there were obviously forces out to get us. 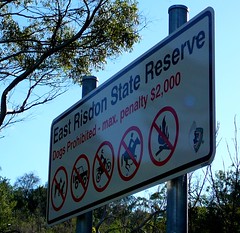 At the 2nd waypoint, near disaster nearly struck!  The sign we needed to gather information from was in perfect order – except for a few scratches on one corner.  The corner that had the necessary information.  A couple quick phone calls were made, and the information was obtained from the White Pages; whew!  That was another close one!

Of course by now we were determined.  We’d come so far, we’d been through so much – there just couldn’t be any stopping!  The next challenge was The Climb: the steep section of track.  And as sections of it had turned into something that looked more like a stream than a track, we get bonus terrain stars.  We made our way up, with me anchoring the group.  The eldest Marine ensured we knew what progress we were making by keeping us updated on how many metres we were above sea level.

When the elevation updates were plateauing, we entered a new Danger Zone: The Magnetic Ravine.  Of Death.  It has sucked in many an unsuspecting cacher with its strange magnetism.  It’s usually at this point on the track that cachers think ‘the cache is only ### metres that way – and the cache description says something about the top of the hill and I’ve topped the steep bit – I think it’s time to go bush’.  Resist that thought.  RESIST.  Continue on – all the tracks are on my GPSr 🙂 – you can do it!  With much encouragement, we avoided the Magnetic Ravine (although SG-3 still looked towards it longingly).

So that just left us to follow the tracks (that were all on my GPSr) and then make our way to the cache from a safer spot.  Which – believe it or not – we accomplished!  It was tricky going getting through the last bit of off-track walking, however everyone was able to negotiate it.  The youthful eyes of The Marines soon revealed the cache’s hiding spot, and after some judicious stick poking to ensure a snake or blue-tongued lizard’s sleep wasn’t disturbed the cache was in hand.  (Luckily, all our nemesis had left to throw at us was nats.) 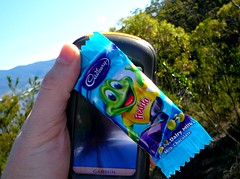 After the signing of the log, we made our way to a waypoint called ‘Muffin break’.  (Really – check out the map below!)  Now I really can’t believe the prep others put into these expeditions.  Here we were at a waypoint called Muffing break – and SamCarter breaks out muffins!  Once those had gone down (and it didn’t take much time; thanks for the lovely choccie muffin!), SG-3 breaks out edible frogs – to consume after making a find on a DDTs cache!  It was a lovely spot – and someone’s obviously camped there before.  This track is on the high point, with the hill falling off steeply to either side – forming coves and points on the Derwent.

The youngest member of our mob seemed keen to  head downhill rather than up – and perhaps swim back to the car? – however he was easily persuaded to retrace our steps and take the warmer route back.  The sun was for the first time in a while shining unimpeded and the temperature was a blistering 19C, so it was great walking weather. 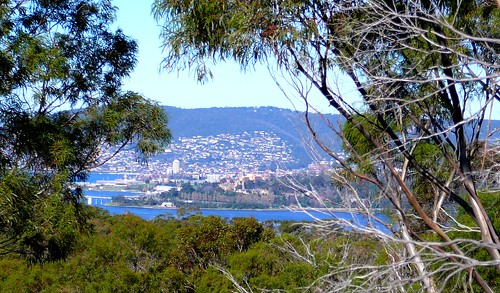 We took a slightly different route on the way back, but all was well as the track was on my GPSr.  🙂  A fantastic walk with fantastic company!  I must say I enjoyed doing the cache much more than the last time!!