Last year for his birthday, I gave Scott a gift certificate for a Peppermint Bay Cruise.  I was getting a bit worried the gift certificate would expire before he used it, however today off we went!  It was a bit brave of us considering early Spring doesn’t make for the most reliable weather, but we had a lovely day.  (Yes, I just counted warm and comfy cruise on which we would be served a beautiful lunch and wine an act of bravery.  Well, you don’t know the wind that comes with a Tasmanian Spring!)

We dropped Lottie off with Naomi, who actually volunteered to let her come over for a play date with her dogs rather than spend the day alone.  It’s really so nice knowing your dog isn’t pining away for you – so a huge THANK YOU to Naomi!!

The cruise is on a catamaran called the Peppermint Bay II.  It leaves from the Hobart waterfront, so as we were slightly early we ran an errand at Salamanca.  Even on a fine but cool day, the markets are unbearably popular!  Did I ever mention I’m not keen on large quantities of people?  We arrived well before time, but the wait didn’t seem long and soon we were on board and ready to go.

The cruise we were doing leaves from Hobart water front, goes down the west side of the Derwent to the D’Entrecasteaux Channel, stops briefly at Peppermint Bay (Woodbridge) to pick up lunch from the restaurant there, then tootles the Channel while we have lunch before returning to Peppermint Bay for a 1 hour stop (the crew’s lunch time).  Then the cruise returns north along the east side of the Derwent, takes a little diversion under the Tasman Bridge, and returns to the Hobart waterfront.  You know I’m going to give you a map of the route, created from me keeping my GPS on all day and plonking the file into this post, so let’s just get it over with now, shall we?

So south we headed, going fairly fast past Battery Point and Sandy Bay. . . 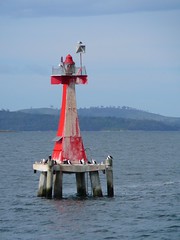 . . .and not really slowing down until we were past Taroona.  We spent quite a lot of time at Alum Cliffs, which I really enjoyed.  There’s a walking track along the top, however it’s really nice to get the different perspective on it – the cliffs really are beautiful (much nicer than this photos shows – extremely colourful with different coloured rock, lichen, and staining from the water). 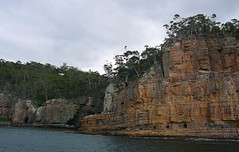 We rounded the corner of Alum Cliffs so we had a view of one of Snuva and Lottie’s favourite places, Kingston dog beach – however we speeded up again then and my photos aren’t great.  We slowed down a bit again near Blackman’s Bay blowhole: 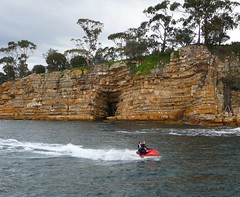 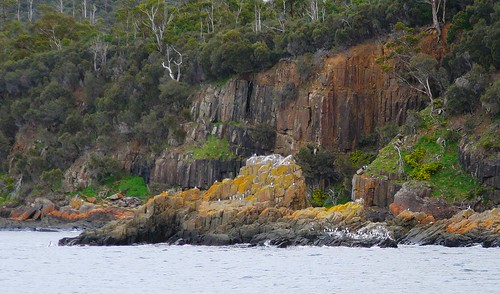 After passing Blackman’s Bay we continued south.  Just before the Tinderbox Marine Nature Reserve there was someone special waiting for us in a tree on shore: a White-Bellied Sea Eagle.  This is obviously a regular rendez-vous as not long after the boat appeared the bird started circling.  And not unnecessarily; the crew had a mullet whose stomach had been pumped with air (so it would float on the surface of the water) waiting to throw it.  They repeatedly mentioned that they have permission to do this.  (I wonder what my photos of this would have been like with the new camera if I’d had it last week?) 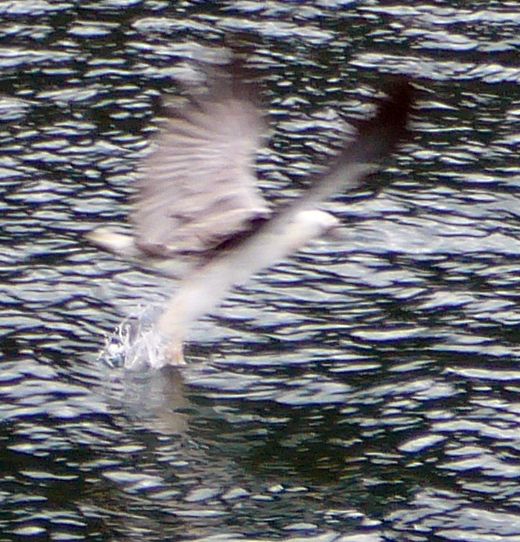 Soon we were really close to the coast – it seemed you could reach out and touch the hill plunging into the water – and they lowered an underwater camera.  This is the Tinderbox Marine Nature Reserve, and they did quite a great job of manoeuvring the boat and the camera to give us a look at the floor of the Channel starting in the shallows and going deeper and deeper.  It was really quite fantastic.  Of course at this point I was trying to conserve my camera battery so didn’t get any good photos of the fantastic fish and sponges and such we went past.  And yes, I said I was conserving camera battery.  Because the battery life is so good, sometimes I forget that it doesn’t last for infinity. 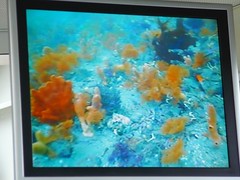 On the way to Peppermint Bay, we stopped off to see one of the many salmon farms.  They’re certainly lively!  The cruise is affiliated with the Peppermint Bay restaurant at Woodbridge, which prides itself on showcasing seasonal produce from the Huon and Channel region.  We stopped in and a golf cart from the restaurant delivered our Tasmanian Bento Boxes to the catamaran.  (They kept calling it a ‘regional lunch platter’, however do you see a platter?)  Lunch was much better than this photo makes it seem.  Each contained: 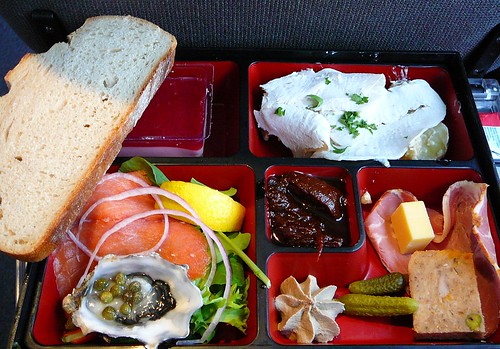 While eating lunch we went over to Bruny Island and circled a few smaller islands.  It was most pleasant and civilised.

I’m just gong to zoom forward through the stop-over at Woodbridge and our return trip north.  I spent a lot of time taking photos of spots I’ve visited from short – Gellibrand’s grave, etc.  The cruise was great – actually better than I expected.  Things such as the underwater camera at the marine reserve, tuning into the salmon farm’s underwater monitoring cameras, the fantastic lunch, etc made the trip worthwhile even for locals out on a day when the weather was rather average.  The crew were friendly, and the banter though informative could be rather ‘Australian’ at times; I must say I wondered how the guests aboard from China, Singapore, India, etc reacted to some of the commentary – or if it was entirely understandable.  But all in all I’d do it again, which is good as a 2-for-1 deal we happened across means we can go again on Scott’s gift certificate.  Might be a bit more picky about the weather next time though.  🙂 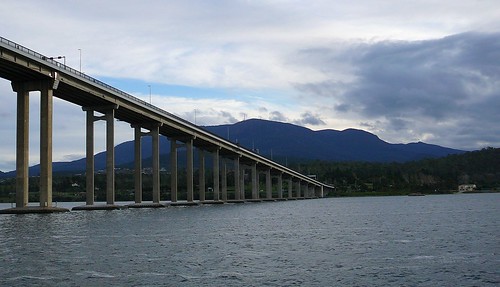 2 comments for “Peppermint Bay Cruise; Or How To Be A Tourist At Home”