My father visiting from the US was a great excuse for us to go to Maria Island; the last time we went was almost exactly 3 years ago.  So we force ourselves to wake up early on a Sunday morning and be on the road by 7.30 am.  (Groan.)  I was especially tired and grumpy from a not terribly good night’s ‘sleep’.  As Maria Island is a National Park, Lottie had to stay behind.  (Much to her horror, Naomi came later in the day and picked her up.  Lottie thinks Naomi’s OK, but she was a bit freaked out when just Naomi came into our house to dog-nap her!)    We needed to be at the ferry wharf in Triabunna a little after 9 am; we were 1/2 an hour early, so in plenty of time.

The Maria Island Ferry is a person (no cars) ferry that goes to/from the island twice a day 4 days per week (more in the height of summer; less in middle of winter).  Maria Island doesn’t have any shops, so you need to take any food or drinks other than water along with you.  You can either bring your own accomodation (i.e. tent) or hire a room in the old penitentiary.  We were staying at the penitentiary, so had to bring our own bedding as well as food.

After an approximately 45 minute ferry ride, we arrived at the Maria Island jetty.  It was a gorgeous, sunny morning.  I’d already booked our accommodation, so just had to check in at the National Park office to find out what room we were in (any vacant or being vacated room according to the very chipper rangers); this is the view of my father and Scott waiting for me with the jetty in the background: 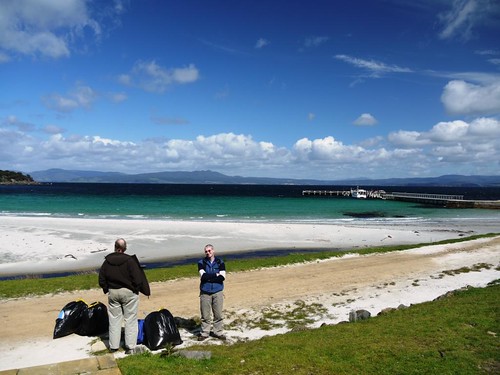 We made our way to the penitentiary.  Scott had all the food and his bedding; my father and I had our bedding.  We’d just shoved doonas and pillows into plastic bags, so they weren’t heavy but they were awkward.  A belt or occy strap around then would certainly have been a good idea (remember for next time!).  When we reached the penitentiary, we had a relax on the verandah.  There were some people cleaning / preparing to vacate room 10, and they recommended it so when they’d gone we moved in.  It was a double sized room and pleasant; Last time we’d stayed in room 7.  In retrospect it was a bit dark (the main room only had one window in front rather than one in front and one in back) and perhaps a smaller room would have been warmer to heat, but that’s just being picky!  I think the penitentiary rooms are fantastic – more like a clean hotel with ‘rustic’ facilities than camping – but maybe that’s just me.

Maria Island has had several different phases of use / settlement.  The first Westerners on the island were convicts.  They originally were housed in log and bark barracks or in huts.   From the Parks & Wildlife website:

The Penitentiary was  erected in 1830 using over 200 000 bricks made at the settlement. At first, the building had six rooms of equal size. Five were dormitories and the other was fitted out as a chapel. The men slept, with feet to the wall, in berths 0.6 m wide, in a tier of three bunks about 1 m apart.

In the second convict era, 66 men slept in each of the six rooms, until part of each dividing wall was removed in 1847 to make one large room guarded by a single officer. The men then occupied 282 berths like ‘bottles in a bin’ separated by wooden battens. In front of the building was a yard with a 3 m high wall and a gate with square brick buildings on either side to hold a prisoners’ library and their bedding.

The building was modified in the late 1880s, and again in the 1920s to provide accommodation. The gables and verandah were added in the 1920s.

After getting little sleep then rising early,  we started off by breaking in our room for some heavy duty relaxing.  The wood stove still had a nice fire going, the bunks only needed bedding to be tossed on top, and we were in business.  Ahhhh – holiday.  On an island and not at home, so no chores to do even if I wanted to.  Only decisions to be made are whether to read or go for a walk.  We all read for a while, then had some lunch.  Then my father and I read a bit more while Scott went for a walk.  (He went to Bishop and Clerk WITHOUT ME!)

The weather had been alternating between sunny & gorgeous and cloudy & spitting a bit of rain, but I was getting restless so in one of the sunny & gorgeous periods I headed off: a geocache (and a FTF at that) was calling me!

I headed up the track behind the penitentiary, past the remains of some cottages, the ‘twelve apostles’.  The buildings were originally built for vineyard workers around 1888 and were used for accommodation until the 1920s.  They were sold in the 1930s for $200 each and re-erected not far away from where we live in Hobart. Mostly what remains are bits of brick foundations / fireplaces and ‘feral’ domesticated plants that survived from gardens. 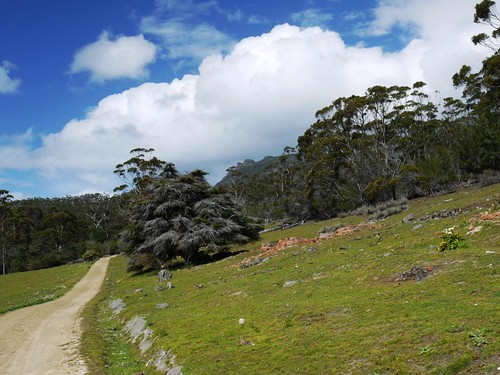 The cache, House  of Bricks, is further along the track near some old industrial ruins.  Just as there have been different eras of settlement on the island, there have also been different industrial eras.  The red brick ruins near the cache site were from Bernacchi’s cement works and were built around 1889.  There are also kiln structures nearby, some probably from the convict era when bricks for construction were made on the island.  After limestone was discovered on the island, the kilns were also used for lime processing. 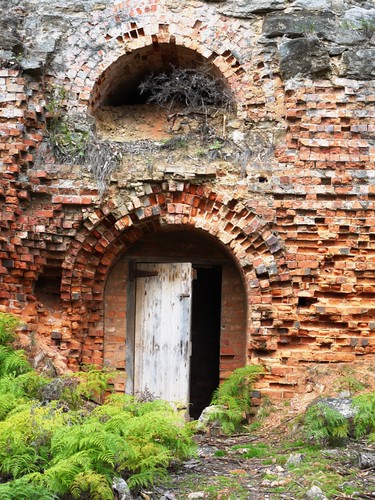 The walk to the cache site was beautiful.  It’s not often I walk entirely alone – without my husband as well as without my dog – and it was eerily peaceful.  I spotted wallabies and wombats – and almost stepped on a wombat while taking a photograph near the cache.  As I was logging the cache, these two hopped by on the main track: 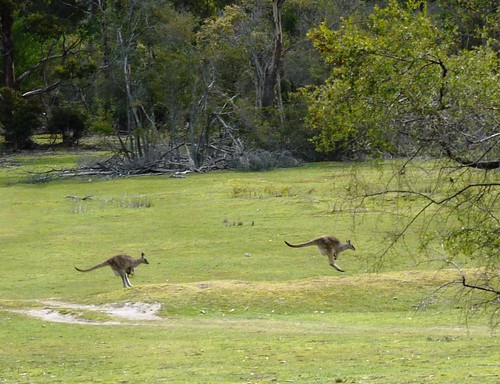 I felt a bit bad that I was enjoying myself so much.  My father had stayed behind to relax and read, but I was having a fantastic time exploring.  Instead of taking the same track back to Darlington, I was making a short loop.  Next I wandered around some old houses, with the only living things in evidence a kookaburra and a mum Forester kangaroo with her joey.  They were grazing in an old clearing and were quite content to let me wander around.  If I got too close, she would just move a metre or two until I was at a comfortable distance and go back to grazing.  She looked up at me occasionally but was happy to just chow down on the grass, with her joey reaching down from her pouch to feed on grass as well.  I stood and watched for a while; it’s somehow strange to 1) be able to just ‘hang out’ with such a large wild animal and 2) take such a relaxed bushwalk! 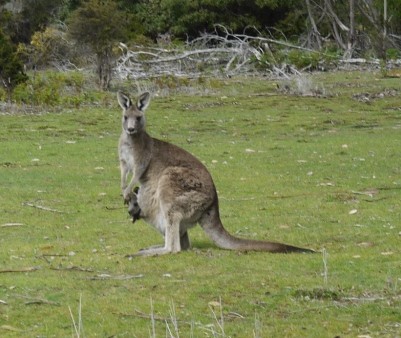 On the way back to the penitentiary, after spotting several Bennetts wallabies, I grabbed some firewood.  My father was relaxing near the fire reading.  I showed him a few of my photos (aren’t digital cameras great!), and we did some more high quality relaxing until Scott showed up.

One of the reasons we had to take my father for an overnight stay on Maria Island was so he could see the wildlife, especially wombats.  So of course we were worried there wouldn’t be as many wombats around Darlington as the last time we’d stayed.  We needn’t have worried; we even seemed to have our own wombat assigned to us.  Looking out the back window of our ‘spare’ room, we could watch a female wombat grazing on the hill (a hill between us the and track behind the building meant she was basically at our eye level!).  So we spent ages watching her. And took several billion photographs of her.  Her pouch was so full it was brushing the ground, but we never spied a little one looking out when she had her bottom to us. 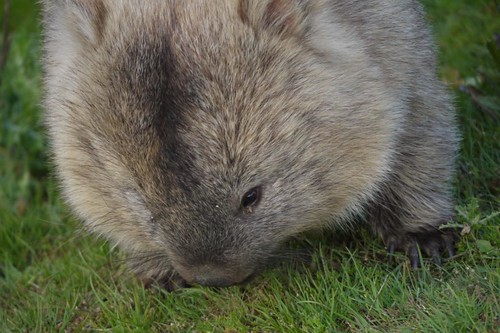 Of course she wasn’t the only wildlife we could see from the back window.  The hill beyond the track was just littered with kangaroos. 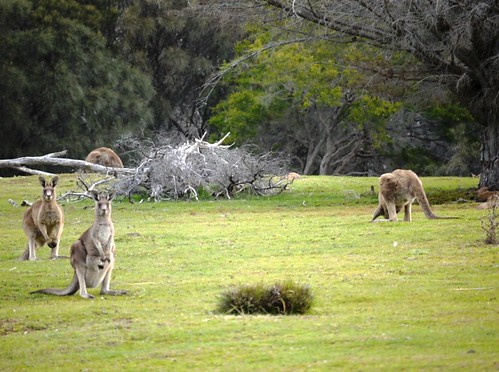 Once the light was fading, I heated up some chilli I’d made for the trip.  I’d frozen it for ‘refrigarated’ transport to the island, and the freezing seemed to add more zing to the spiciness!  After dinner, I retired to my bunk to read while Dad and Scott read and drank wine by candlelight. 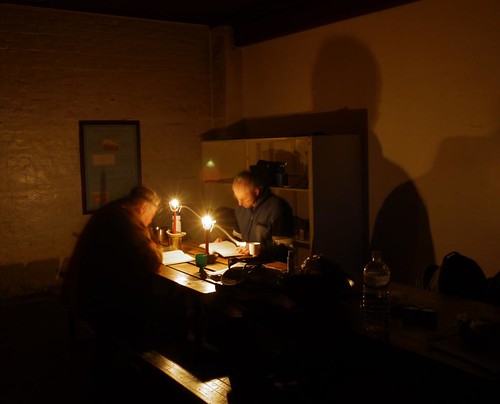