When we were all up I made some eggs for brekkie.   There’s something extra good about waking up away from home on a Monday morning!  I thought of my work colleagues many times during the day – without once wanting to be one of them.  🙂  Today we’d planned to go to the Painted Cliffs which unfortunately are best seen at low tide.  This is unfortunate because low tide at at 7.30 am, so there was not way we were going to be there by then!  So we mosied our way through brekkie and the boys had some coffee, and we eventually walked off to see what we could see.  It was a sunny, sunny day; the forecast was for much more consistent weather than the day before (and it was!).

We were able to see the cliffs a little bit – but you can’t really see how gorgeous they are unless you can get around in front of them. 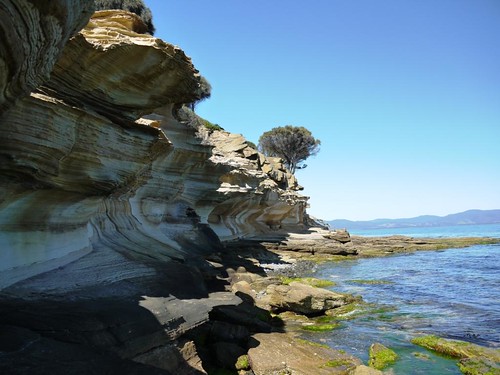 So we spent a lot of time relaxing.  Just staring at the view and relaxing.  Here’s my father and my husband doing just that: 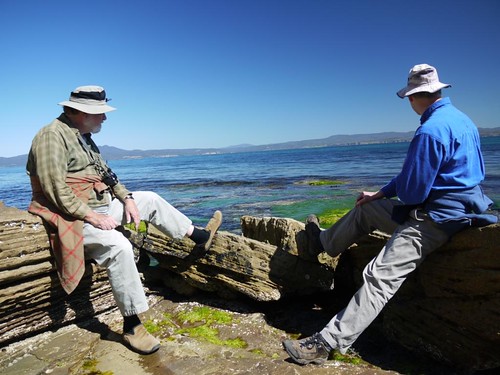 There are also tide pools and Hopground Beach, which you walk across to get to the Painted Cliffs.  Before we reached them, Scott had picked up a hermit crab, which he then put into one of the pools.  After he’d been in there for a while he started to come out of his shell a bit more – so Scott picked him up again: 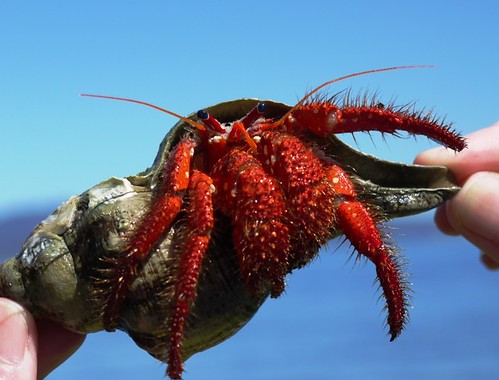 While we were relaxing, I suddenly realised I had a cache to find!  I fired up the GPSr, and it told me the cache was a few metres from me out in the water.  That seemed rather unlikely, so I headed to where I would have put it and made the find.

After spending a while relaxing we headed off back to Darlington via Howell’s Cottage.  From the Parks and Wildlife website:

The Howells were a farming family who came to Maria Island early in the 1900s and were among the last permanent residents to leave Maria Island before it became a National Park in 1972. As you enter the cottage you will see that the inside is lined with wood from old packing cases and then covered with newspapers. If you have a close look you can read some of the newspaper articles.

We returned to the Penitentiary in time for some reading and relaxing.  In fact, that’s what we did most of the rest of the day.  We lunch was we were hungry, read, wandered off to explore other building close by – such as the Coffee Palace – but mostly just read on the verandah.  At one point I heard some pretty enthusiastic scratching, and asked if it was my father or my husband: it was neither.  Listening closely – and then feeling the verandah move a bit at times – it became evident that we had wombats relaxing from the heat of the day below us.

Later in the day Scott went down to the jetty to bring back a luggage cart.  As he had the more difficult job bringing it uphill, my father and I took over after it had been loaded up and drove it back to the jetty.  We then had a bit of a wait in the sun for the ferry that would take us back to the mainland. 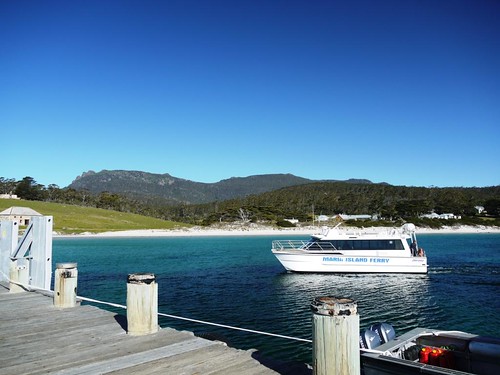 About an hour later (we made an extra stop on the way) we were back in Triabunna, then headed back to Hobart.  We picked up Lottie from Naomi’s house (THANK YOU NAOMI!) and headed home.