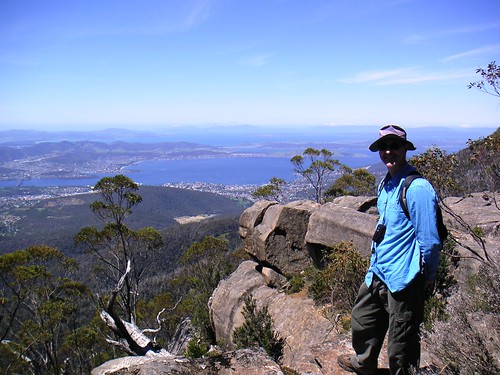 I’ve been waiting SUCH a long time for a day when the slaves were not tied up with other duties and the weather was such that I could risk sending two of my most valuable assets up the mountain, but the day finally came for me to send the slaves up to Jurassic Park!!

So, armed with bottles of water, sun hats, and long sleeved shirts to protect their pink skin, they headed off up the mountain. Due to her normal bumbling around while her mouth was running over, the female slave at first lead them up the wrong track. They only went 100m or so – but it was far enough for the female slave to somehow find the only deep mud puddle in the area, completely immersing of back right paw up the mid calf and splashing muddy slip all up her body! Woo-hoo!

Onto the correct trail, and they made their way up and over and around and through the rocks. Scramble, scramble. The female slave took her inspiration from me and relied on more than just her biped equipment (although I later pointed out to her that her bottom shouldn’t be seen as a limb – using front paws is much more highly regarded). They enjoyed the track quite a lot, even though the female slave thought the edge of the view was, well, a bit close at times! They explored around when they got to the amphitheatre, exploring not just the area but also trying to figure out which trail to take down to GZ. The male slave finally went for it and in finding his way to GZ found the cache while he was still 18m away. They still have no idea how the Old Hobartian Track joins up with the Lost World Track, however the most important thing is they found the cache for me! (You can see more of their photos by clicking on either of the photos above.)

Having completed that mission, the female slave had another one she had promised me: a trip to Kingston Snuva beach! She organised for Mrs CP to meet us there – and as an added bonus we had a Piglet as well! I wasn’t too hungry and was more interested in exercise, so I let the Pigs’ limbs and cheese alone and concentrated on making the slave cause my stick to fly through the air. YEAH!!

And to add to the fun, the next morning the slaves were walking a bit funny. . .like they were old enough to be Jurassic. . .imagine how much fun it is weaving through their legs while they are trying to negotiate stairs!