Today I attended a day of Thai cooking that our friend Helen organised. After the madness of Eskil’s 5th birthday, I was SO looking forward to a day of speaking to adults and cooking! Everyone would know how to eat with a fork; no one would need a bottom wiped!

Helen’s a bit of a local food legend, and her knowledge of Thai cooking has been picked up over the years from the best place possible: cooking with her friends in the Thai community. Today Helen did the bossing (and a lot of organisation leading up to the day), Steve Cumper did much of the cooking, Cate did a lot of the work as kitchen hand and mortar and pestle wrangling, and Janet prepped. Bec was the perfectionist who made the beautiful shumai (not the examples of what not to do).

I arrived around 10:30 am. Today was also a chance to check out the hexagon house that Helen’s mentioned, and it’s a stunning place. It is 3 connected hexagons: one with a sunken lounge (a great place for wine near the fire!), one with the kitchen and dining, and one with bedrooms. It’s located on the Mountain with fantastic views. Obviously we spent most of our time in the kitchen/dining hexagon (with occasional visits to the loo with the view). 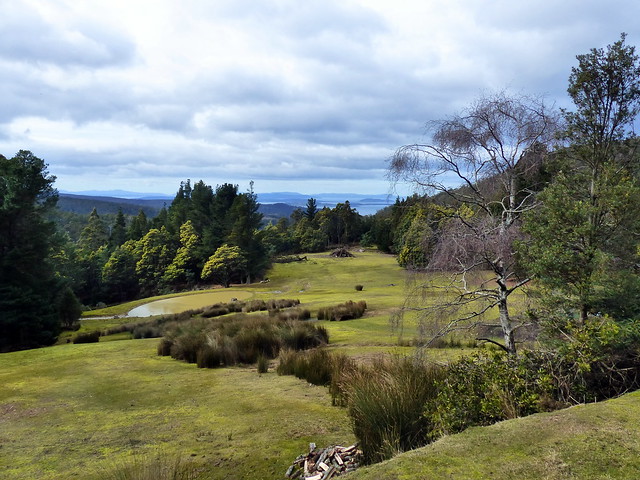 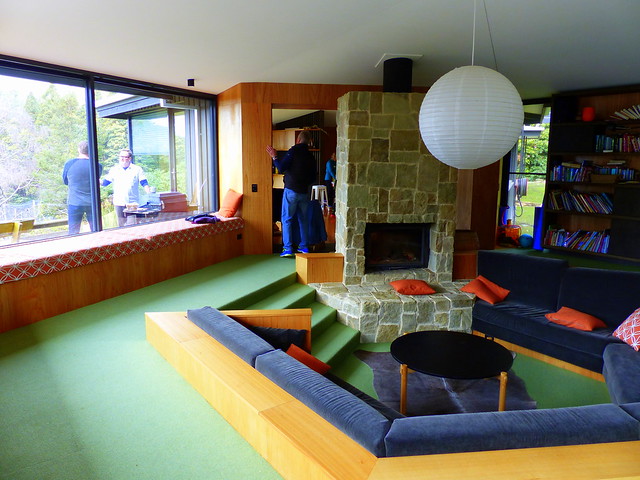 The menu for the day was:

I thought this would be more hands-on, however it was more of a demonstration – which was more appropriate for the number of people who were there!

The first thing that Steve made under Helen’s bossing was the red curry paste. Helen provided us with a booklet with recipes, however she noted that her Thai friends don’t have recipes. The recipes she provided would be useful as a starting point, however the only way to cook is to taste and experiment. 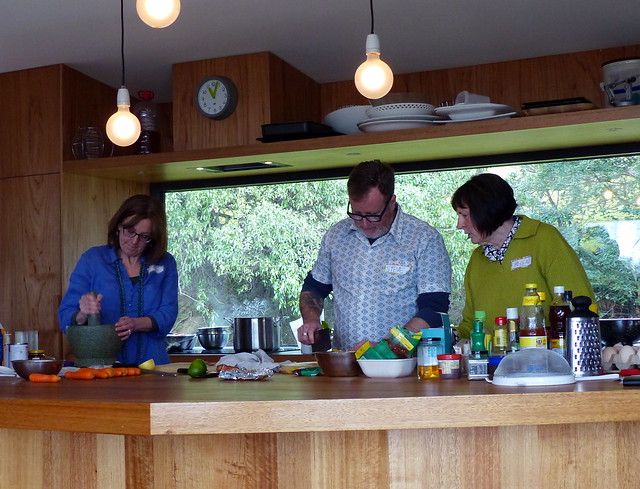 A lot of muscle power went into making the red curry paste in the mortar and pestle (mostly Cate and Sam’s muscle power), however Helen mentioned that even the Thai often use a bought curry paste as a base, then taste and adjust as they cook their dish. In fact, as the curry paste had some ingredients that don’t agree with some of the tummys of people in attendance, the red duck curry with lychees was made using Mae Ploy curry paste.

To make the red duck curry, first Steve cooked the coconut cream until it split – then added the paste. I found this interesting as I usually cook the paste first. We paraded through the kitchen at various stages in the cooking process, and it was fun to taste the flavours developing. Yes, fun – my kind of fun. As an aside, I also found it interesting that a professional, Steve, is as picky as I am about getting everything out of a tin, etc. Apparently we’ve all learned this from living through The War. 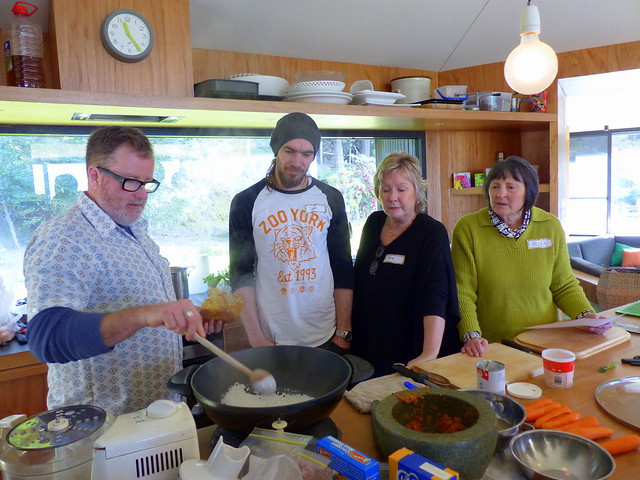 I found Helen’s information regarding where to get a frozen roasted duck interesting; I didn’t realise that any local shops had them this way. You can go to Moonah for one for $26, or if you’d like to pay a bit more so you don’t don’t have to go NCR then Wing & Co has them for $32. When you consider that not only do you have all the meat to pick off but also the other bits (head included) that can just be chucked into a pot to make stock, it’s not a bad buy at all. Plus duck fat for roasting potatoes, etc!

The duck stock had already been cooking away before we arrived. Helen noted that in her recipe she’d added star anise and other shit, but you don’t need that shit. (Chucking shit into pots or leaving shit out were quite a theme for the day.) To get it ready to have as soup for lunch Helen soaked rice noodles in cold water; they could then be added to the warm soup to cook themselves just before serving. She risked shortening her life by cutting them up. 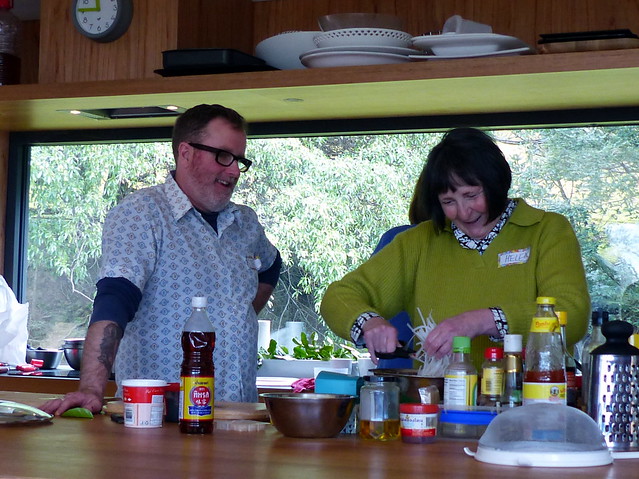 During a coffee and leg-stretch break, Steve finished cooking the beef for the salad and put it aside to rest. 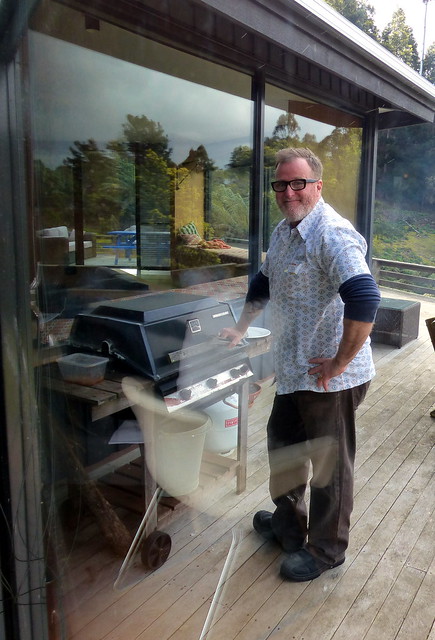 The next dish to be prepped was the pork and prawn dumplings (shumai). The prawns came from Deb’s business, TasFresh Food Service in Moonah. She certainly sounded like she knew her prawns, so I think I’ll be out there to get some. When I make dumplings, I usually don’t use prawn – plus I usually use more Japanese flavours in them. So it was interesting seeing the ‘Thai spin’ on them. Steve cut himself while cutting up ingredients for this, so Cate was the one to get her hands stuck in and to get the proteins working. Helen had some frozen shumai that she had made up before, however the ones Bec made today were beautiful. 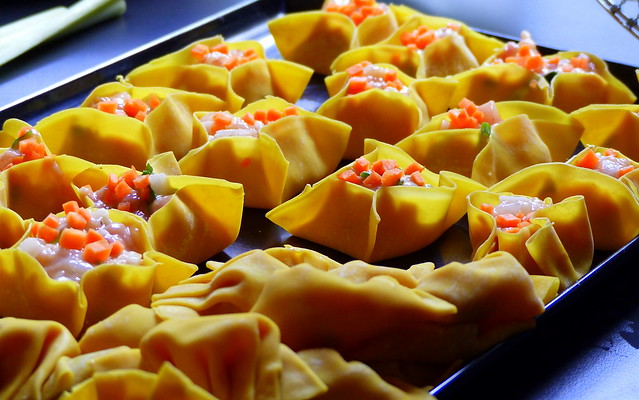 The chilli, lime, and sugar sauce was perfect on them. 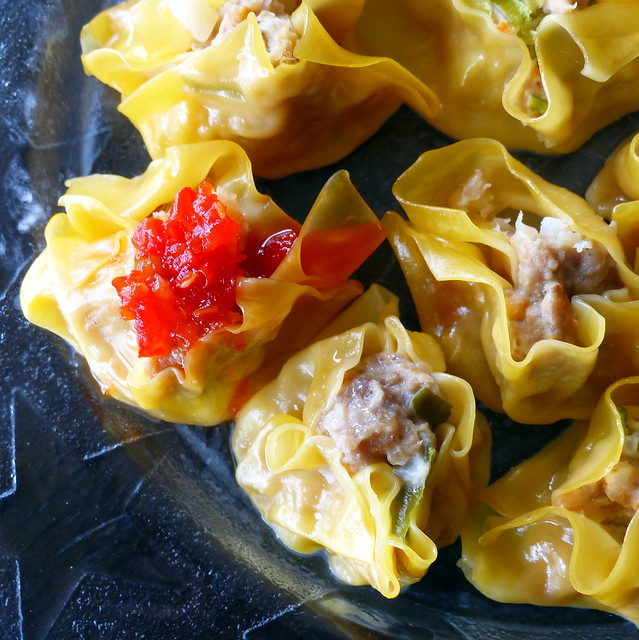 Next some khoa khua / toasted rice powder needed to be made for the beef salad and the larb. I’ve never made or used this, but I know some of my favourite Thai places do and I love it. It’s so simple to make and adds fantastic flavour and texture. It’s just uncooked thai sticky rice (or jasmine rice) and kaffir lime leaves dry roasted in a pan. Then you beat this in a mortar and pestle until it is a ‘textured powder, not a fine powder you’d put under your arm’ (I think we were all worried about Helen putting toasted rice flour under her arms at this point). 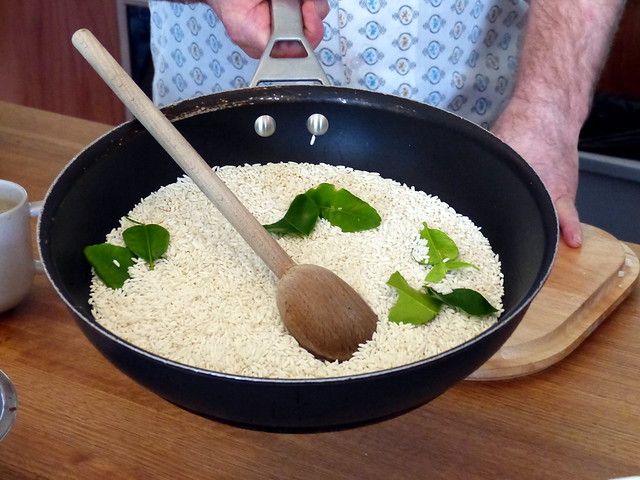 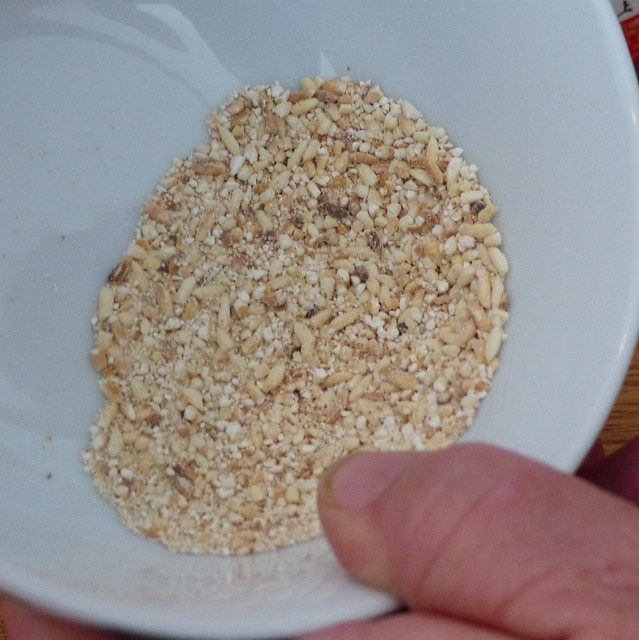 There was now khao khua to make the sauce for the beef salad. When that came together the rested beef was sliced and layered into a magnificent salad; just look at it! 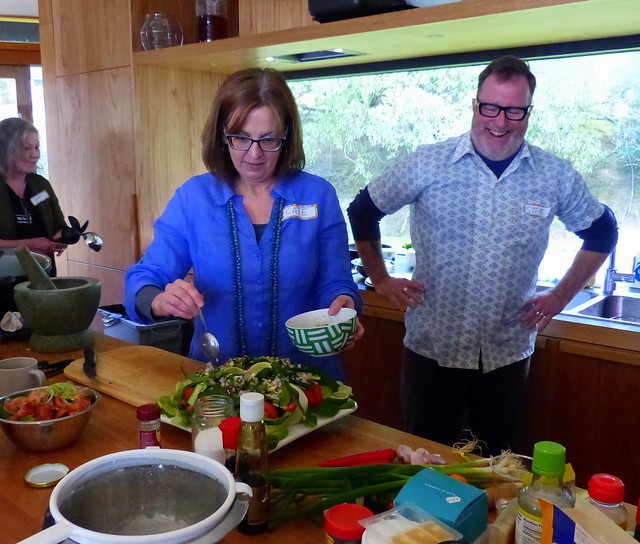 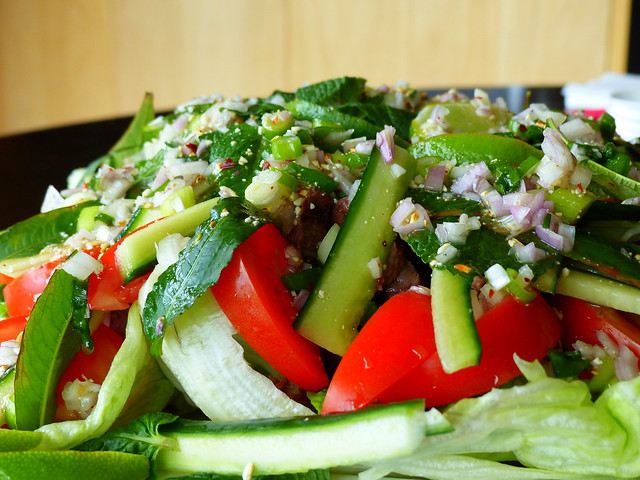 With so much laughter, good information, and interesting anecdotes, time was perhaps getting away a bit. Some of the group needed to leave by 2 pm, so we switched gears a bit. Steve got the ‘batter’ for fishcakes ready, then while he was making the chicken larb and getting the Massaman curry going Janet and I made the carrot salad. I used to make carrot salad years ago, but to be honest ever since Eskil was born 5 years ago I don’t make hot-spicy food as often. I haven’t made carrot salad in years, and it is delicious.

Dishes were being finished and placed on the table. Shumai had been coming out of the steamer as they were ready (delicious!), and the Thai fish cakes were soon ready. I really liked them; they were much nicer than any others I’ve had. Other than the Massaman curry, everything else hit the table now and we could all feast. 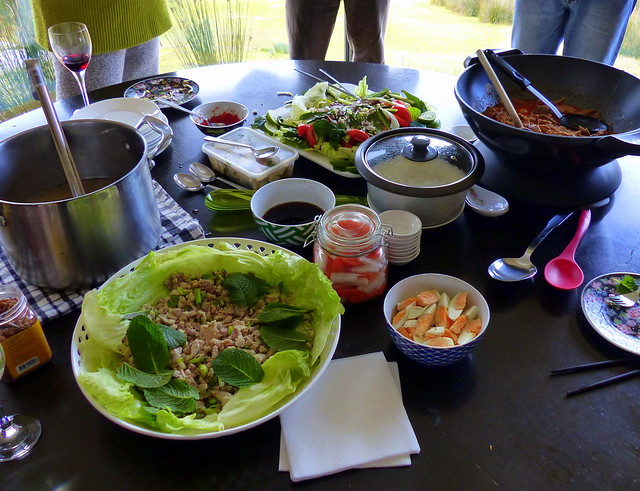 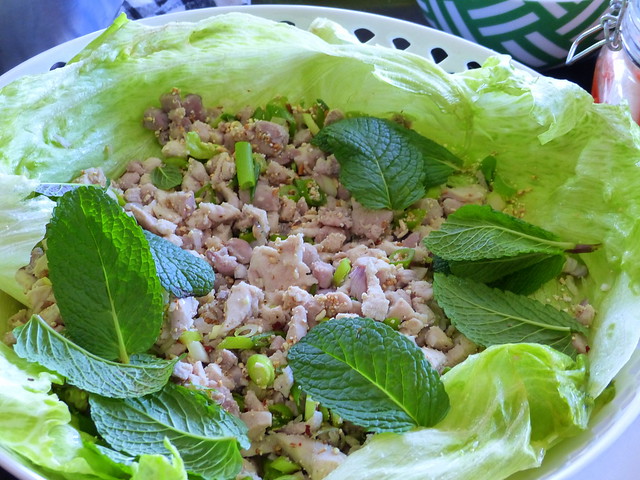 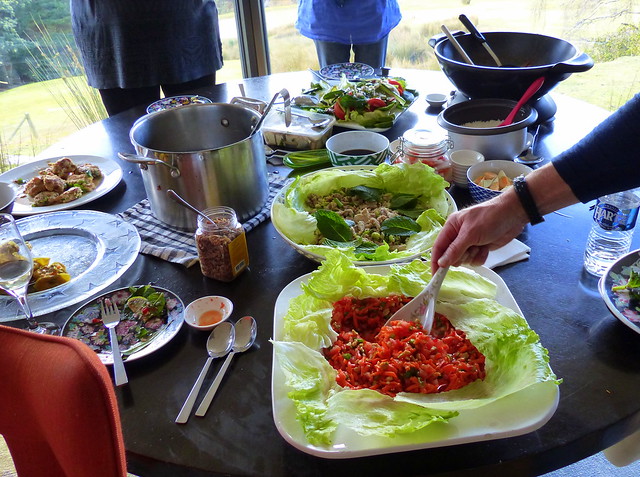 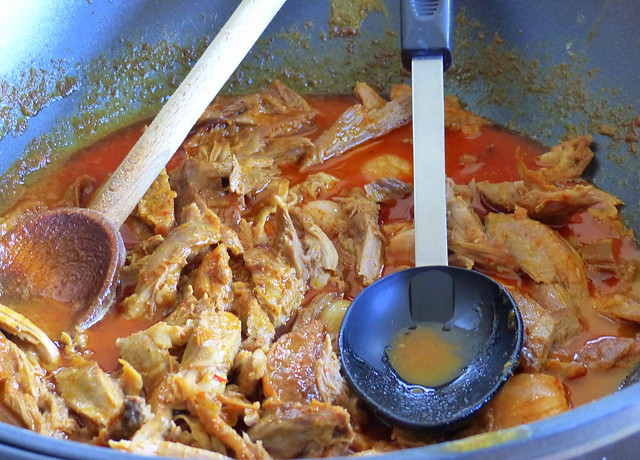 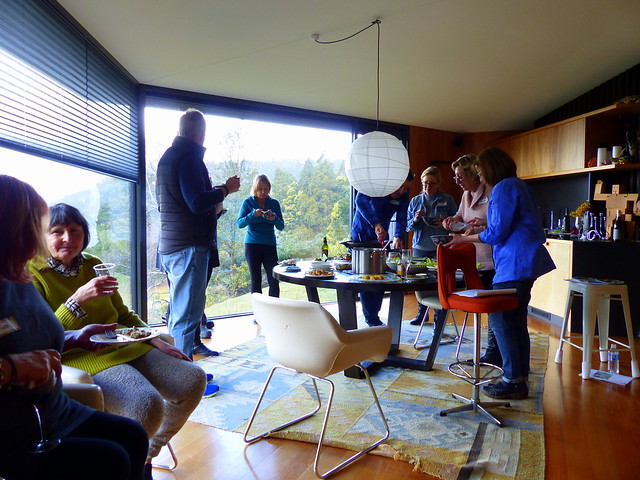 Helen’s organisational skills astound me. Who else would organise a rainbow to appear as the food is ready to eat? 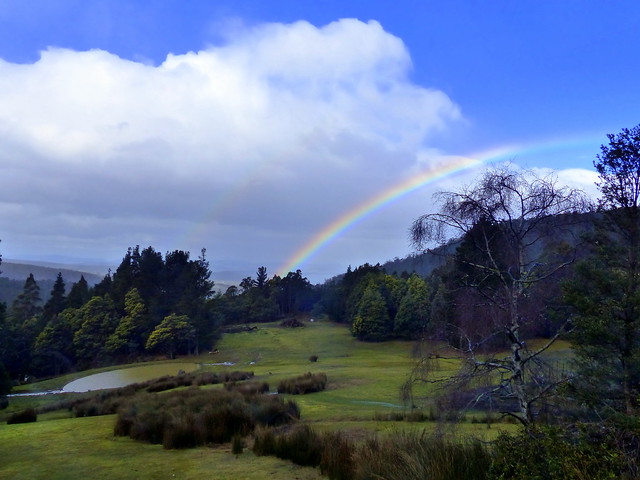 I hung around for a while after eating to chat. It had really been a lovely day; there’s so much more I could mention! Steve had some really informative commentary and is in general a really nice guy. Helen did a fabulous job organising it all, and I’m grateful that she included me. And she has lots of supportive friends and family who helped the day come together, Cate, Janet, Bec, Sam, Ness of course, Caz who supplied eggs and did washing up, Deb who helped with the supply of prawns, etc!

Before I left, Helen asked me what I’d take away from the day. I hadn’t really digested my thoughts yet, but I think for me the most interesting points were:

7 comments for “Thai Cooking with Helen and Steve”