After a comfortable night in the van when Scott slept well and Disa didn’t, we stirred and were out of bed around 8am. Robin and Lucy were already up, and Scott chatted with them while Disa hunted out breakfast makings. As our neighbours headed off for an early morning appointment in Triabunna, we had coffee and pancakes for breakfast. LOTS of pancakes. So many we didn’t make up all the batter! 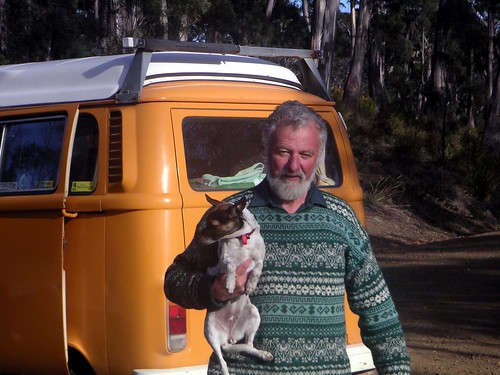 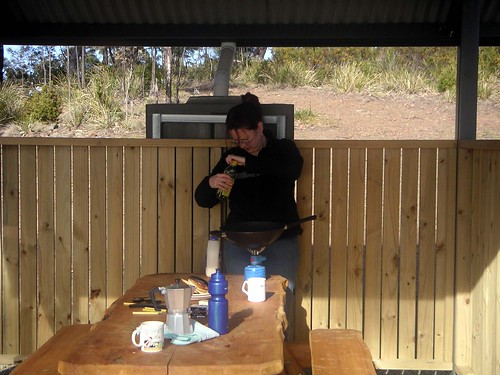 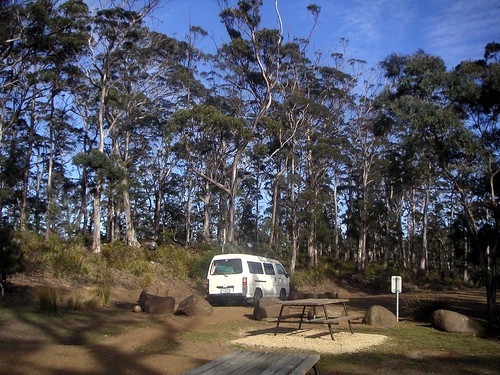 Next on the to do list was ensuring we had everything ready to get on the ferry. Maria Island doesn’t have a shop and although we had accommodation with bunks so didn’t need to take a tent, we did need to take our own bedding, food, water, etc. So we loaded up the zippy new cooking stove, food, pot and utensils, clothes and bedding – separating out everything we would be using at Freycinet to ensure we didn’t haul around extras onto the island.

We decamped just after 9am for Triabunna to make the 9.30am ferry to Maria Island. 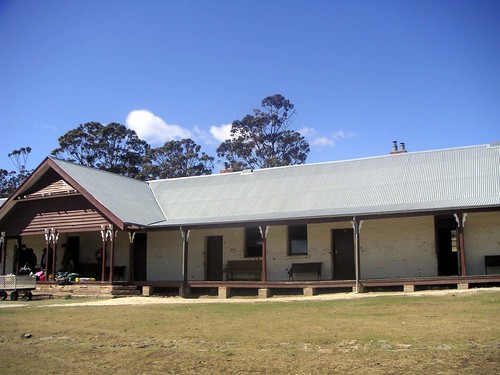 We found a park and grabbed our belongings just in time to be able to hop on board. We arrived at the jetty near Darlington at about 10.15. Scott grabbed most of our belongings and I toddled along behind with just my rucksack and a few pillows. We made our way to the Commissariat where the ranger told me we were in Penitentiary room 7 and that low tides were posted at the ranger station in Darlington (important information for visiting the Painted Cliffs). Living and working on the island must be fairly relaxed, because I experienced that strange feeling when you start a holiday and are still moving at ‘normal’ pace but those around you are moving in a slower holiday (or in this case island) mode. I was the first person to arrive at the Commissariat from our ferry, and the ranger was taking time giving me information, looking through everything slowly, while everyone arriving behind me was impatiently shuffling around the room.

When I had all the info I needed, we continued on to Darlington. The Penitentiary wasn’t signposted obviously enough for overloaded Craggs, so after a bit of hunting around we finally found the building and our room. The room was basic – 6 bunks along one wall, a wood heater and shelving along the other, and picnic table in the middle – but it had everything we needed and gave us a place to leave our stuff. And then we headed off.

Our destination for the day was the summit of Mt Maria. We headed off up a slight hill, which was made arduous as we had a considerable head wind. We were barely out of Darlington, and I was beginning to wonder if this was going to be a bit much! However, once the track turned inland and we were walking through the bush, we were out of the wind and warm. The sun was shining, there was much bird song, and we were wandering new territory. 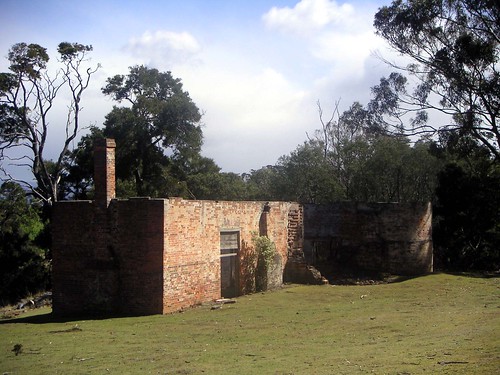 Our first stop along the track was at the ruins of an old oast house. We continued on and eventually the track headed ever more sharply up – and up. Scott spotted a snake (and managed to keep control of his bowels! But not his vocal cords), and up and up we continued. Approximately 2 hours on the track and we stopped off on a sandstone shelf with a view west towards the mainland. We lunched on tuna with sun dried tomato and basil, whole wheat biscuits, peanuts, and dried apricots and cranberries. Ah. Off we went for more! 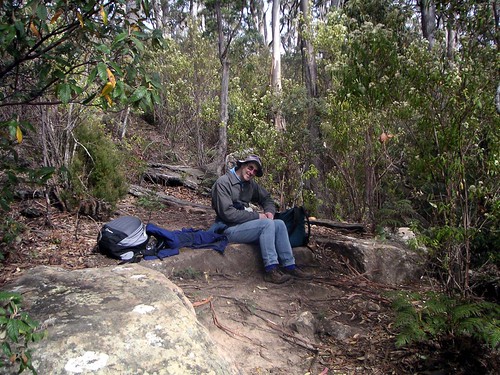 Between our lunch spot and the summit was quite a bit of steep clambering over boulders and climbing rock faces. And lots of wind. Evil, mountain sweeping wind. And one of those rain clouds that had been occasionally interrupting the clear blue skies (and adding cool relief when we had been under the canopy of the bush and protected from the wind) hit us when we were just below the summit. I just couldn’t do it. We had climbed up and we in a protected spot at the top of a climb, with the next part of the track across an unprotected area with a sharp drop-off – and I couldn’t do it. Now my question for myself is: why is it I am so obsessed with summits and trig points when I’m scared of heights? And why get married on the RIM of the Grand Canyon? In any case, Scott continued to the summit, I cowered just below. He hung on tight to the trig and took photos of the panorama; I hunkered down and wondered what was taking so long. He hunted around for the geocache; I was convinced he’d been gone so long that he must have been blown off the top of the mountain. Just as I was steeling myself to get to the top to see where I would have to tell the rangers the body needed to be retrieved from, he came back to the land of the living! YEAH!! We had planned to have a snack at the summit, but it was too miserable so down we climbed and scrambled until we arrived back at our lunch spot, where it was sunny and warm and protected from wind and any possibility of falling off the mountain. Nice. 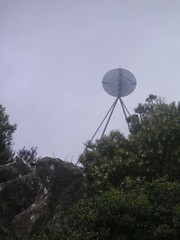 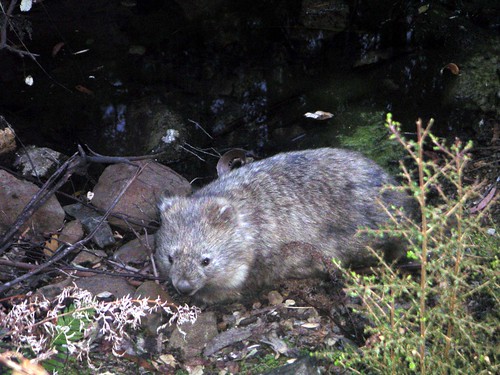 the mountain we made our way. Strangely enough, the way was much easier going downhill than it had be uphill. As we were crossing the second bridge, we thought we saw an animal scampering across the stream bed. We took a second look, and no, it was just a boulder. But on closer inspection the boulder was cowering in the side of the creek bed and trying to convince us it was a log. WOMBAT!! WOM-BAT!!!! It was actually fairly relaxed about us being there, so we watched it for white a while and when we started off he headed up the opposite embankment. We were quite chuffed and pleased with ourselves for having seen a wombat on our walk!

Our entry in the walker registration book had said we expected to be back at 6pm, and only a short detour would take us to the Painted Cliffs, so we decided to check out the tide. Shortly after our track joined the coastal track, we saw several Forrester 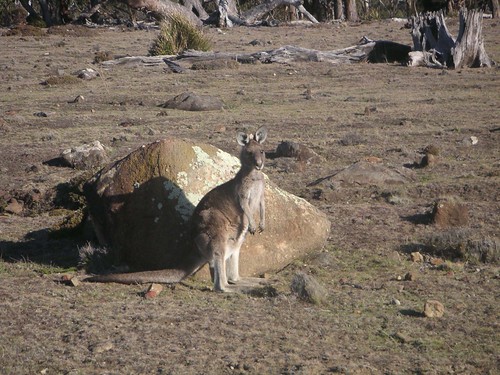 kangaroos, and spent some time watching them. As we continued along the track back towards Darlington, we saw more. And more! And wombats, just casually walking around and grazing, totally unconcerned about the humans passing by. And wallabies! And strangely enough, the closer we got to Darlington, it seemed the more animals there were grazing around the fields. We had decided to stay overnight on Maria Island because someone had told us how much wildlife there was, but we hadn’t realised it would be so easy to spot them and they would be so close to the settlement.

We registered our safe, slightly footsore, return then turned to practical matters – getting wood for the wood heater in our room as spring nights in Tassie can be cold, checking out the low tide timetable at the ranger station and preparing a meal. Disa soon had a roaring fire heating the room, and a magnificent meal of vegetable tikka masala prepared. After eating we set out armed with a torch to view the animals at night, the sun having set and the light faded. Although we saw some more kangaroos it was a quick trip as we were both weary from our 16 kilometre walk to Mt Maria’s summit and it was rather cold. So we retreated to the comfort of our room and went to bed listening to the sounds of the people next door playing rowdy poker (this is like normal poker but with much more fun and loud laughter.