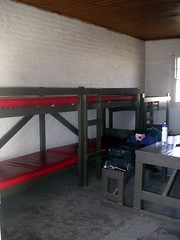 What a brilliant night’s sleep it was for both of us!  The Penitentiary rooms have wooden bunks along one wall, and each bunk has a vinyl covered foam mattress.  You bring your own bedding, so we were each armed with a big pillow and a doona. We’d been a bit concerned about warmth as it was a typical Tasmanian spring and not terribly warm, but with the wood fire going we were actually warm enough we both peeled back our doonas during the night!  Disa got some coffee then pancakes going, and a filling brekkie was had by all.  Just in case someone arrived on the early ferry who would be staying in ‘our’ room that night, we made sure to clean and pack everything up and then stash our belongings in an out-of-the-way part of the room with a note explaining we’d be leaving on the 4 pm ferry.  The weather was much like the day before – sunny with the occasional cloudy patch moving overhead quite quickly – and we headed off towards the Painted Cliffs to check them out during low tide. 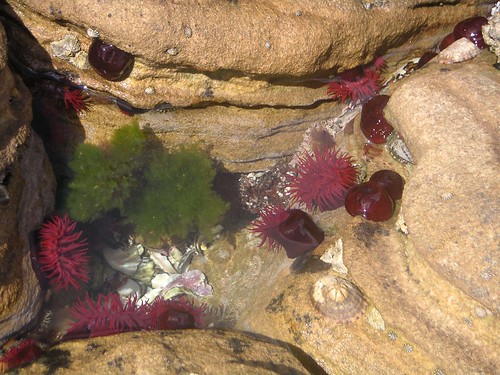 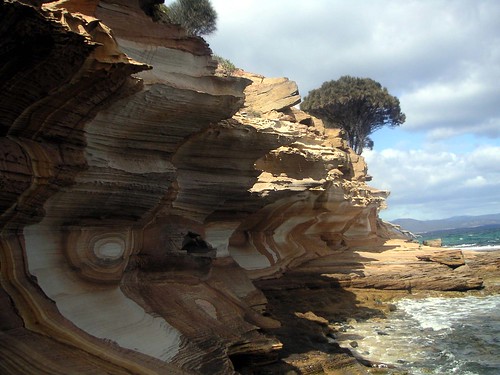 The walk to the Painted Cliffs was lovely – up a short rise then along a lovely little beach of white sand with views across to the 3 Thumbs.  We could see several other people at the cliffs in the distance, but as luck would have it they were all leaving by the time we arrived.  The first section of the cliffs was lovely, but we didn’t realise how much more amazing they would be around the corner!  We clambered and gazed, clambered and gazed, then  stopped for a break from the wind in a sunny but sheltered section of the cliffs.  When some new arrivals came, we made our way back to the track, stopping at Howell’s cottage to read the newspapers on the wall before returning to Darlington.

At Darlington we checked to see if anyone else had ‘checked into’ our room (no), then spent some time reading about the buildings in Darlington.Â There were signs to explain what purposes the buildings still standing held during their lifetimes, and there were two buildings open that had further information:  Smith O’Brien’s cottage (he was an Irish political prisoner) and the Coffee Palace.  The Coffee Palace had some really fantastic information about the different eras of settlement on the island (early convict period, whalers’ period, later convict period, industrial period, and the most recent inhabitants).  It also had a room with artefacts, recordings of commentary by some of the people who lived on the island in the 20th century, and photos of people who lived on the island.

After filtering some water and packing up our lunch, we headed out to the Fossil Cliffs.  We started off inland past the Cement Works, noting all the non-native plants that must have escaped from islanders’ gardens at some point.Â The walk started off through bush, then uphill through a grassy gully to the top of the northern cliffs.  We then turned west towards the Fossil Cliffs and were attacked by wind when we reached the top of the hill.  One of Scott’s legs decided it didn’t like bending to go downhill, so we were looking out for a place to stop for lunch but this was rather difficult in the wind in such and open grassy area.  We made our way to the Fossil Cliffs and found enough shelter from the wind to be able to stop for lunch.  Our views were to the north – Schouten Island with Freycinet behind.

After a brief look around the cliffs we headed back towards Darlington, taking the route past the air strip.  Big mistake.  Wind.  WIND.  Veeeeerrrryy windy.   The walk was actually rather miserable; later that night we wondered why we seemed to have sun burn before realising it was actually wind burn – and it would have been from this part of our walk.  Ugh.  So windy we skipped having a look at the cemetery and just made for the big brick barn – mainly so we could hide from the wind.  From the look of all the decoration on the farming equipment, the birds hide from the wind there fairly often as well.  If it works for the locals. . .  Next stop was the Commissariat Store (not a store any longer, but where you go to pay park entry or camping fees, and get a bit of information about the national park).  We had a leisurely stroll back to the penitentiary, then had a rest in our still warm room until it was time to heft our belongings to the jetty in order to get the 4 pm ferry.

And what a ferry ride it was back to shore!  We were headed into the wind, and workers on the ferry must have all been eager to knock off for the day and get to their Sunday roast.  This all makes for quite a bumpy and wet ride.  We were towards the front of the ferry, and unable to see out of most of the windows in our section as there was just too much spray.  And don’t sit too close to the windows if you don’t want to get wet, even when they’re closed!

After a much shorter journey than the one to Maria, we arrived back in Triabunna and the non-caching cacheMobile was soon on the road.  We passed Robin, who was filling up with petrol at the station, then headed north at the main road.  How good does it feel heading north up the east coast on a Sunday afternoon when normally we’d be headed south to home and then work the next day?  FANTASTIC, thanks for asking!  On the other hand, we were feeling a bit under prepared; EVERY car (almost) had a kayak (or two) and bike (or two)  on board as they were all headed south having participated in the Freycinet Challenge that weekend.  When we booked our nights at Freycinet Lodge a month or two ago, we hadn’t realised it was the Freycinet Challenge weekend and hoped most people would have left; what a great thing it is we decided to book Sunday and Monday night instead of Friday and Saturday!

It was rather exciting just pulling off the main east coast road towards Freycinet as this was uncharted territory (Freycinet is a National Park, therefore non-Snuva friendly, so not somewhere we’d been to although we’ve passed the turn off many times).  And as we drove through Coles Bay and saw the Hazards from this side of the bay – WOW.  There were many cars in the car park, so obviously not everyone had left after the Challenge, but we ditched the van and made our way to reception.  Since they were so busy, they’d already booked us in for dinner at 7.30.  It was 6.15, so we quickly made our way to our cabin, grabbed packs of clothes and toiletries, and hit the showers.  Showers, ah.  Hot running water.  Lots of huge fluffy towels.  A soft robe each.  Electricity.  We love camping but what a lovely change!  Oh – clean clothes (we did bring our own – but it’s especially nice changing into clean clothes when you’ve been camping and had a shower!).

Off to dinner!  We were seated at a lovely table right next to the windows, with views of Coles Bay and the setting sun.  The menu was horrible:  too many fantastic sounding choices!!!  But troupers that we are, we eventually chose and ordered.  Scott had a duck entree and venison main course; Disa had a twice baked blue cheese souffle for entree with Harissa chicken main.  The food was wonderful.  So flavourful, and substantial enough to satisfy even people who’d spent the past couple days bushwalking.  YUM.

Unfortunately, we were too full for dessert so made our way back to our cabin.  The spa beckoned, and in we hopped with a cup of tea (Scott) and a hot chocolate (Disa).  Scott likes his baths quite hot, however we soon found that having a spa as hot as we’d usually have a bath doesn’t go down quite so well so we retreated to bed.  And we didn’t even need to provide our own bedding!