After breakfast in a cafe near our hotel, we headed to IKEA. Because we’re Tasmanians. And because IKEA. We arrived before they were open. When they did open we did something we’d never done before: we let Eskil stay in the playroom. He was quite keen to as there was a ball pool and lots of games – and we could shop alone! Without arguing about all the thousands of things Eskil wanted! We had lots of fun, found the light fitting for the dining room that Scott has wanted and a few other things, but by the time our hour was up I was ready to pick up our little man. He had a great time; the IKEA staff were fantastic. We headed to the restaurant for köttbullar, as you do.

We’d heard about the fantastic playground at The National Arboretum Canberra, so we headed there. The Arboretum’s trees aren’t very old, however it is in a stunning setting, looks well planned, and has some fantastic buildings. The Village Centre is lovely. There’s lots of glass and views and, of course, so much wood. 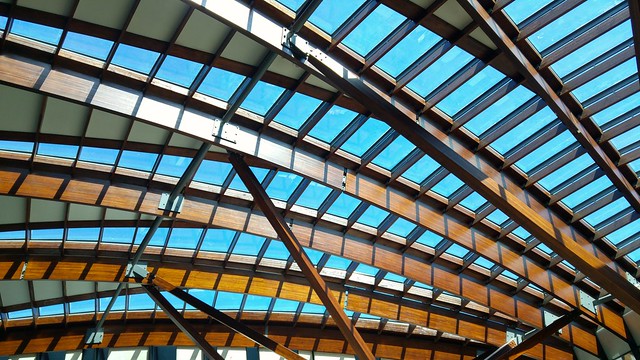 It has interesting displays for adults and children and a restaurant and cafe with some really fantastic looking food coming out. We had already eaten lunch, but we grabbed some yummy coffees to enjoy while we were in the playground.

AND THE PLAYGROUND! It has a few different sections, so there are parts appropriate to lots of different ages. Eskil’s favourite part has different acorn shaped structures linked by tunnels made of rope and tunnel slides. 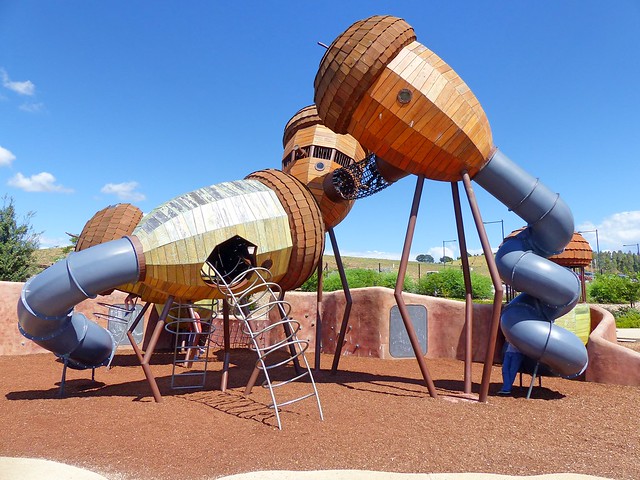 Eskil and Monkey had a great time! 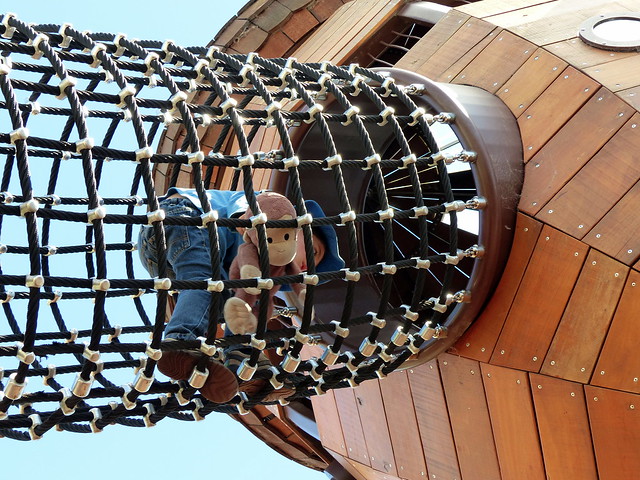 Even the playground’s gates are super awesome, with lots of Australian animals. 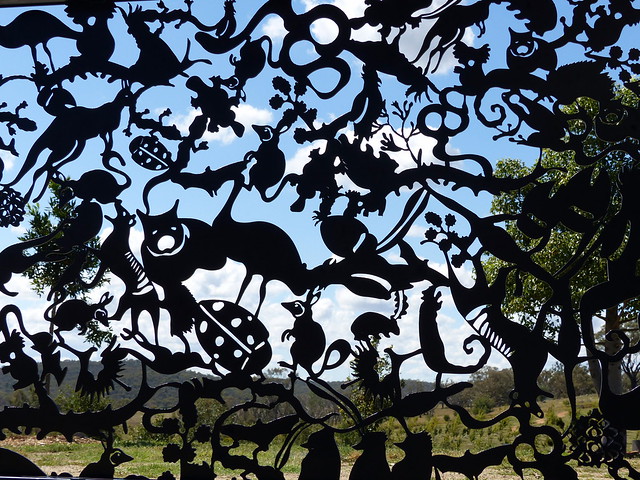 We could see something on a summit nearby – it almost looked like text – wide brown land?! We had to check it out. 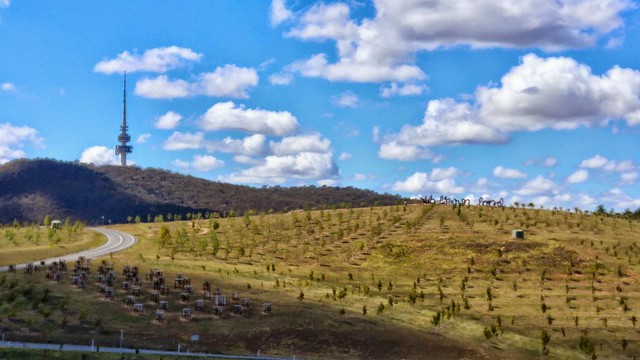 It was even cooler close up (and there was a geocache!).

We went for a walk in one of the few mature stands of trees, the Himalayan Cedar grove, and Eskil was VERY tired. VERY. 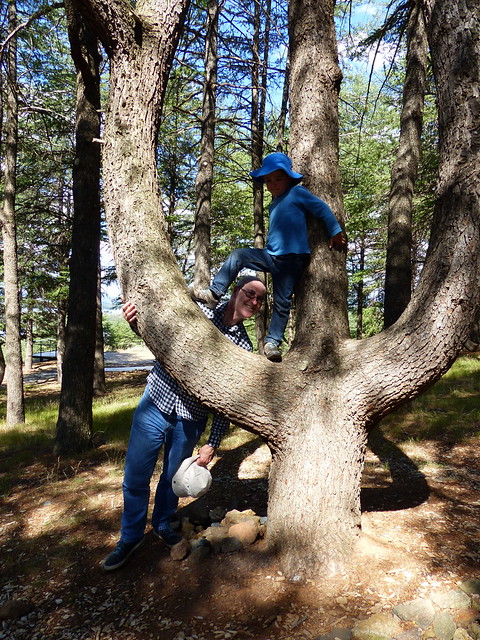 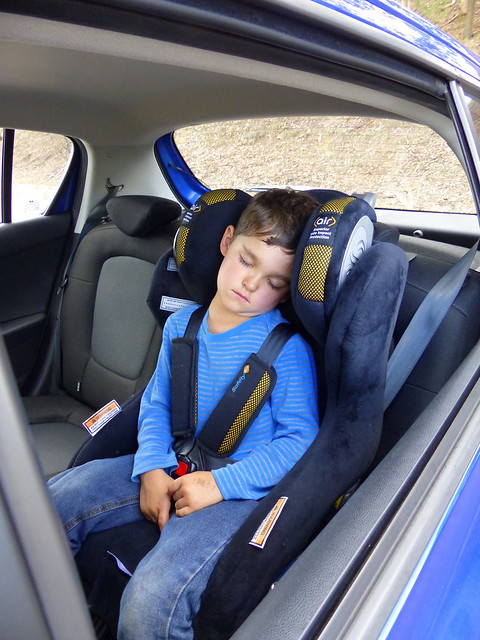 And Scott and I enjoyed the views (and found a geocache). 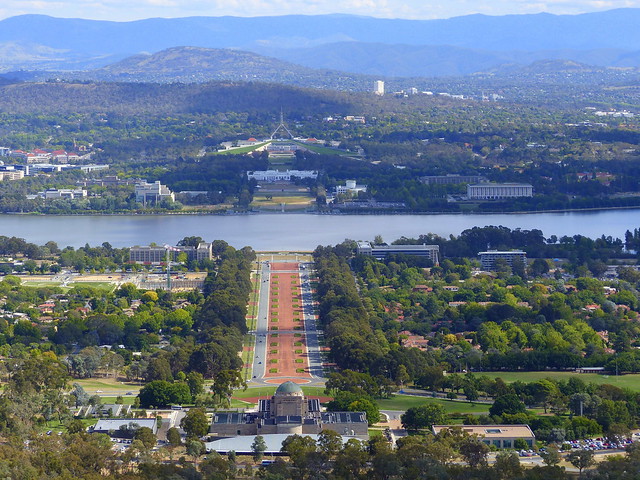 We headed back to the hotel for a rest and to see how our plans panned out for the evening. We headed out to find a restaurant in our neighbourhood and wound up going to a pub, The Duck’s Nuts – mainly so Scott could tell his friends from work that he’s eaten somewhere called The Duck’s Nuts. We ate in the courtyard. Eskil had water – really. 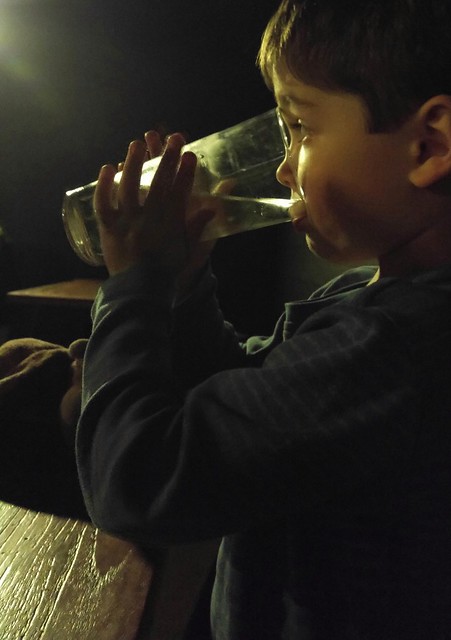 It was a big day! 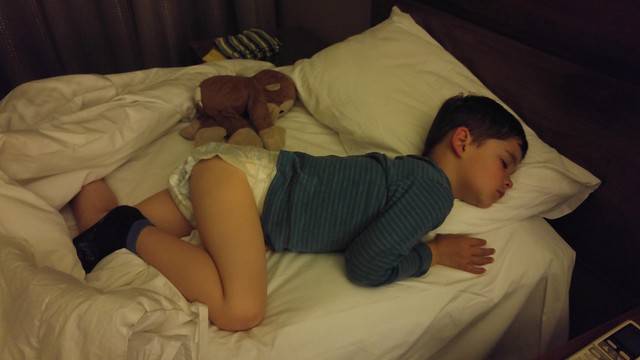 More photos can be viewed at https://www.flickr.com/photos/cragg-ohlsson/archives/date-taken/2016/03/17/.

← Canberra: and we’re off!
Canberra: Museum and Parliamentary Quarter →