The last 12 of 12 for 2009 was (thankfully) a Saturday and not a work day!  We were headed up to the North West of Tasmania to attend an event.  Most photos are geocoded (there’s a link to a map for each on Flickr), but I haven’t included a trip map nor geocache logs (mainly because I haven’t logged them yet!). 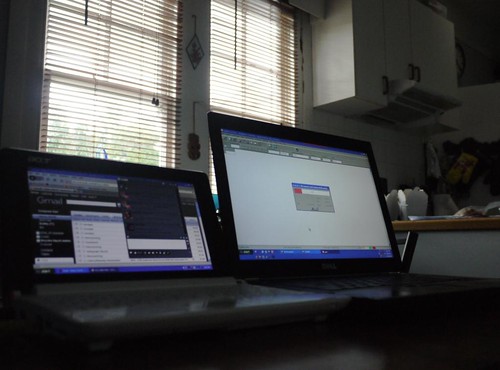 Very unusually, I was awake and out of bed befor the husband.  Perhaps the wine the night before was keeping him happily snoring?  He hadn’t had that much wine but is probably out of practise. 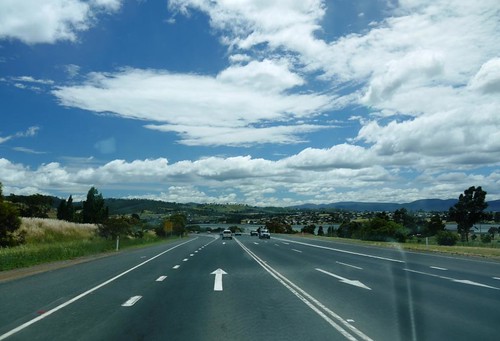 The event wasn’t until Sunday, so we weren’t in a huge rush to get north.  We did stuff around the house – loads of wash, ran the dishwasher, showered, etc.  Then had to pack the van – which had been completely emptied (usually all our camping stuff is in the van already).  As I was stowing things under the bed, I realised when the husband had put the bed back together he’d forgotten to put the cross braces up in the central section – so that had to be sorted before we left.  We eventually got on the road, only to have to come back after getting petrol when my husband realised the folly of wearing a nice white shirt camping.  So finally getting on the road and headed north felt GREAT! 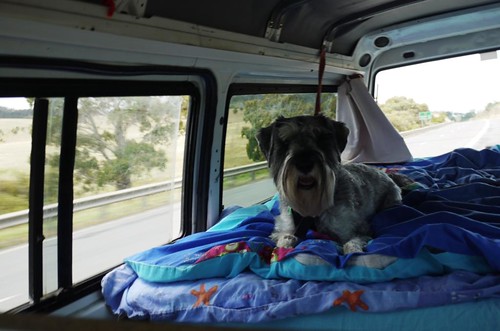 Our van has two front seats, and the back is taken up with a bed and storage underneath it.  Lottie rides on the bed, wearing her car harness which is attached with a strong lead to the van’s frame.  She also has sliding glass windows cracked for her so the all-important sniffing can be done.  So she doesn’t get our bed filthy, we put a fitted ‘dog sheet’ over our sheet then 2 ‘dog doonas’ on top of that.  That way even if we stop somewhere and she goes for a swim the bed is fine.  She also likes rearranging the doonas to make things yet ever more comfy for her.  In the evening, the doonas go onto the floor between the bed and the back of the front seats to make her bed.  And try to encourage her to NOT climb up and sleep with us. 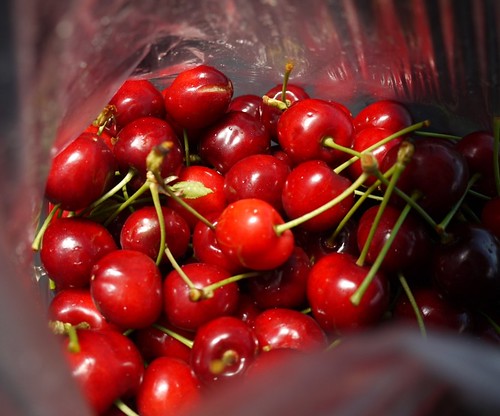 4 of 12: Cherries Bought at the Roadside at St Peter's Pass

We bought a kilo.  I’d finished about half before we got to Tunbridge; Scott finished the other half when we stopped in Campbell Town.  Not the usual variety we normally get around the Huon, but these were certainly sweet and lovely.  We stopped for a brief time at Campbell Town, which Lottie appreciated as I gave her a short walk and which Scott appreciated as then he could eat his cherries (or I would have been in danger of eating them ALL). 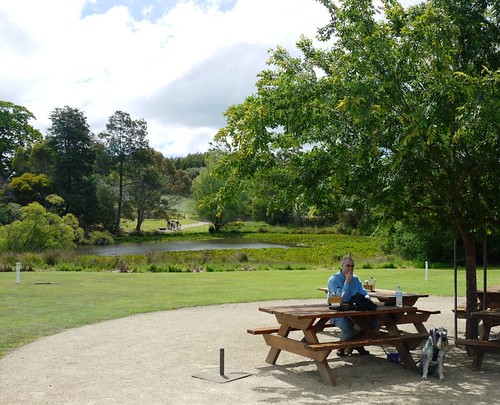 I doubt I will ever adjust to Christmas being in the summer, however one aspect of a southern hemisphere Christmas I would find hard to give away now is the fresh fruit.  Christmas in Tasmania means raspberries and cherries.  In mass quantities.  We decided we couldn’t pass up lunching at Christmas Hill Raspberry Farm since we were going past.  And it’s dog friendly.  Canine-challenged people can sit inside in the cafe, but there’s also tables outside under a tree.  You get a great view of their little lake – and as a bonus for dogs there are native hens running around to attract their attention.  And usually lots of children running around in the play house or playing cricket (you can see wickets in the photograph) or croquet.  We decided to have some herb damper – which was yummy – and rasberry crepes and raspberry cheesecake – which were very, VERY yummy! 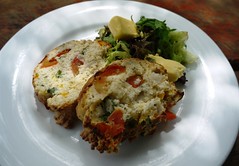 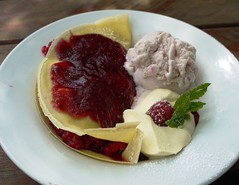 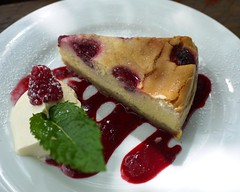 When we finally reached Devonport, we met up with MullinItOvr at her and her partner’s place.  Then we headed off together to do some geocaches together along the Devonport headlands.  So now a bunch of photos taken while geocaching: 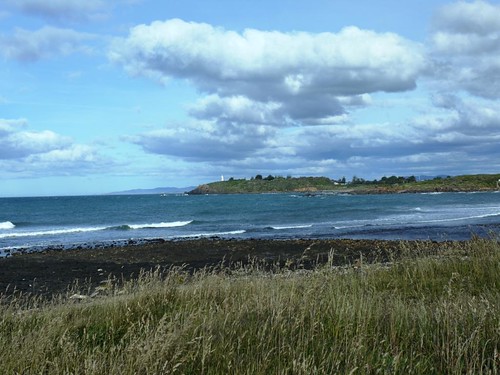 6 of 12: Geocaching on the Devonport Headlands 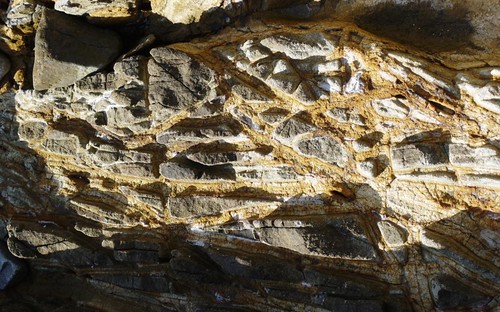 7 of 12: Geocaching on the Devonport Headlands 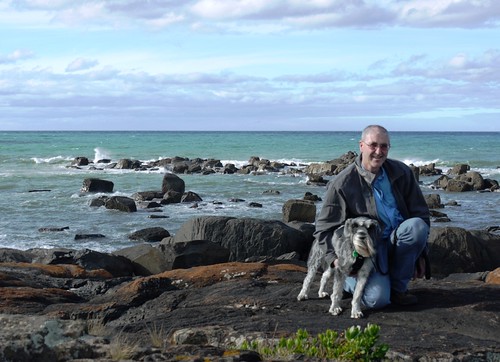 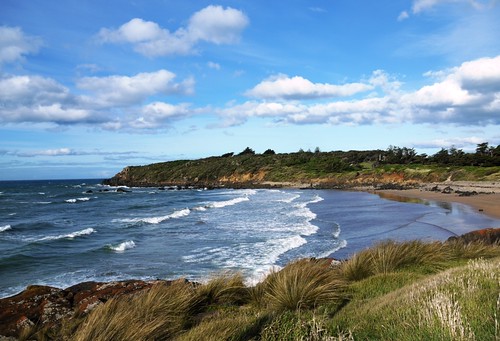 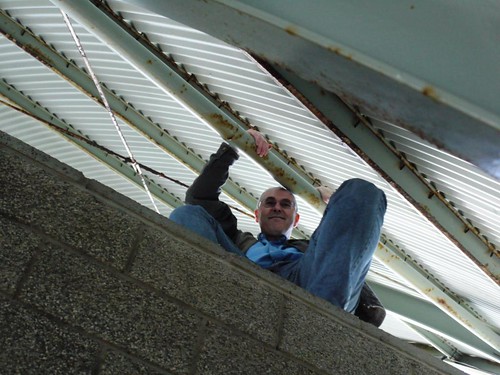 10 of 12: Geocaching Takes You Interesting Places 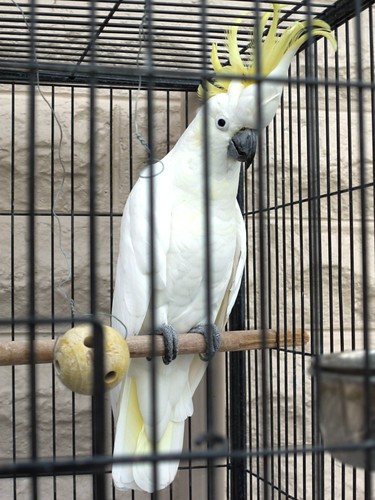 It suddenly was late; why does that always happen while caching?  So we went back to MullinItOvr’s place where she and Leon prepared a fantastic BBQ.  Lottie was very impressed by their generosity with meat; she would like it noted that schnauzers love BBQs.  But not so much the salad part.  Unfortunately we still had to get to our camping spot (where the event was being held the next day and where several other cachers would already be camped), so we basically filled our faces and left. . . 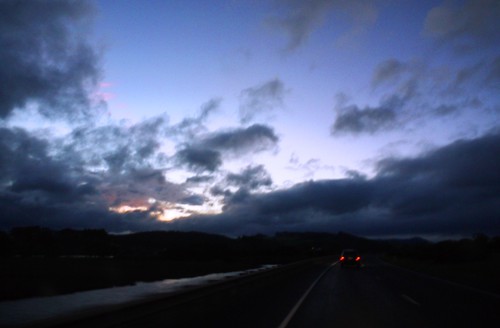 And it was after 9.30 pm and dark before we arrived a Pioneer Park.  So we just pulled in at the bottom of the campground (not far from the loos; yes, I’m pregnant) and set off to find the group.  We arrived in time to see a few teams who were about to head off – red tag, Flange_1& tribe, and CarollEyre.  Robtas had the hut, so we all went in and chatted / relaxed for a couple hours.  Lottie did her best to extract pats from everyone she could, and even did a pathetic little act to make people pity her being on the floor.  We all headed off to be sometime around the witching hour; I was MUCH soberer than the last time I’d been in that hut late at night!