After making breakfast in our flat, we took the train to Arashiyama, just outside Kyoto. It was a day packed full of awesome. First we took the Sagano Scenic Railway, which runs along the Hozugawa River to Kameoka. The ride was stunning and gave us a look at the sort of boat we would soon be going down the river on! 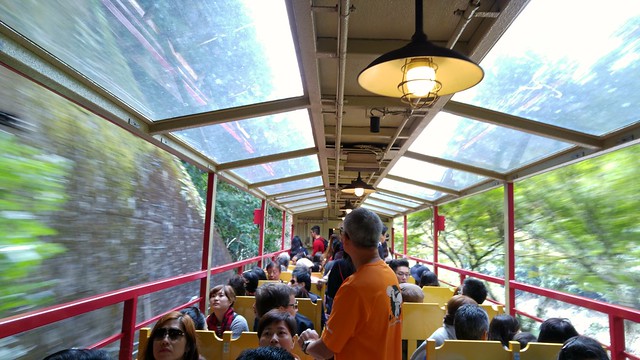 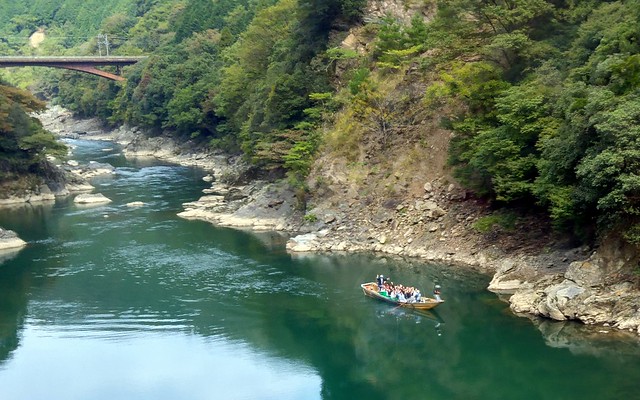 The railway clings to the hillsides beside the river, and the valley opens out at Kameoka. From here we took a bus to the launch for the Hozugawa river cruise. The cruise was in a traditional style, flat bottomed boats. The boat was piloted by a VERY strong crew of 3 using a steering oar in the rear, one in the front, and a bamboo pole in the front to propel and steer. The crew worked HARD, especially whoever was on the bamboo pole (they took it in turn)! I wish I understood the Japanese commentary, however it was a stunning trip. 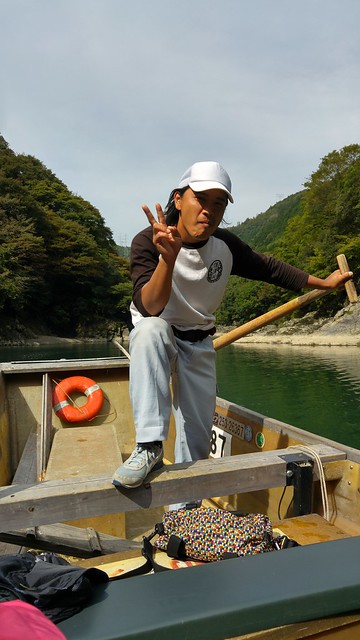 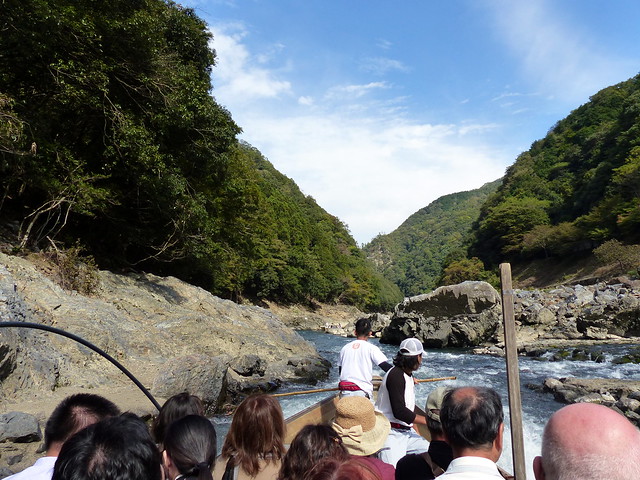 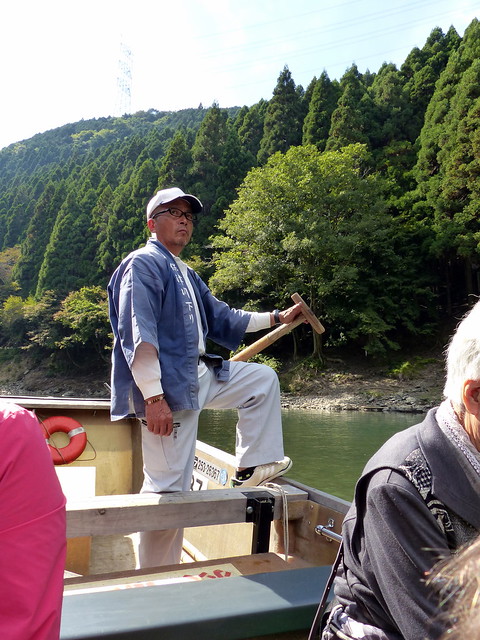 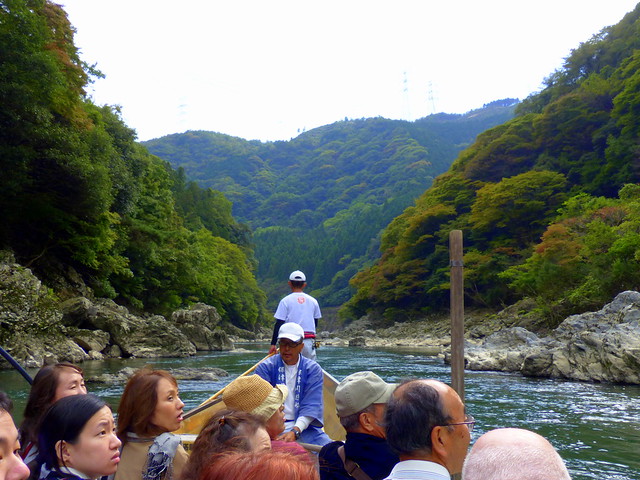 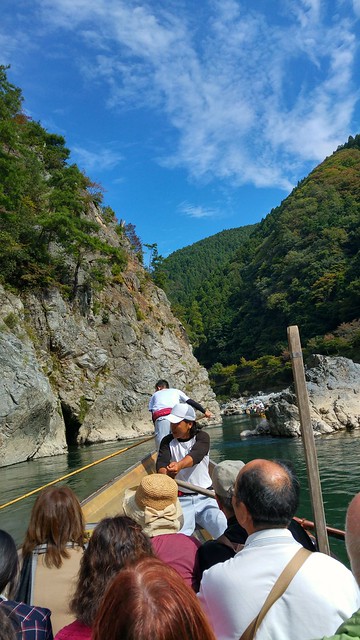 Near the end of the trip a snack boat came along side. We didn’t get anything, but the ladies next to us shared some of their grilled mochi with Eskil. (If we’d known how bad our next meal would be, we would have eaten here!) 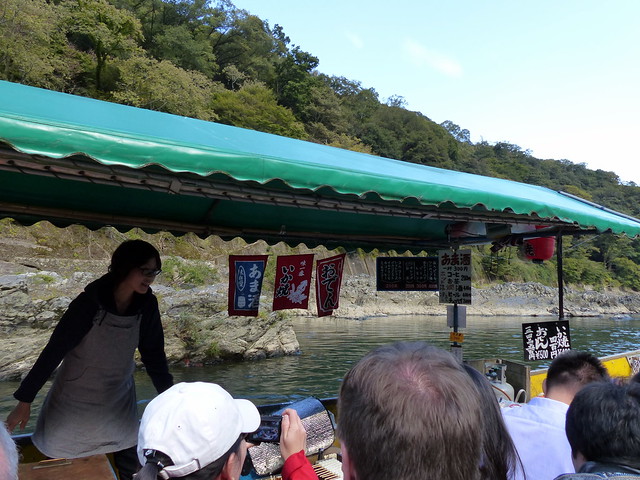 The trip ended at Arashiyama just upstream of the weir near the Togetsuko Bridge. 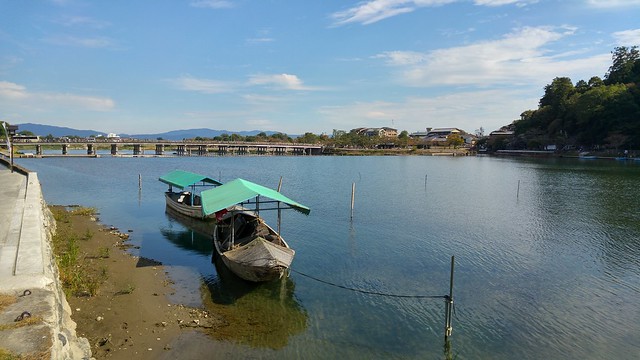 We headed over the Togetsuko Bridge and stopped at the first cafe over the bridge for coffee and lunch. This meal will be immortalised as the worst meal in Japan.

Next we made our way to the foot of Mt Arashiyama and into the Iwatayama Monkey Park! You walk uphill through the forest, and at the stop there is a clearing and a monkey (Japanese macaque / snow monkey) reserve. Laughably we were SO excited to see our first monkey and stop and admired and photographed – then continued up the hill and there were SO MANY MONKEYS! Monkey George was so thrilled to see so many members of his family. 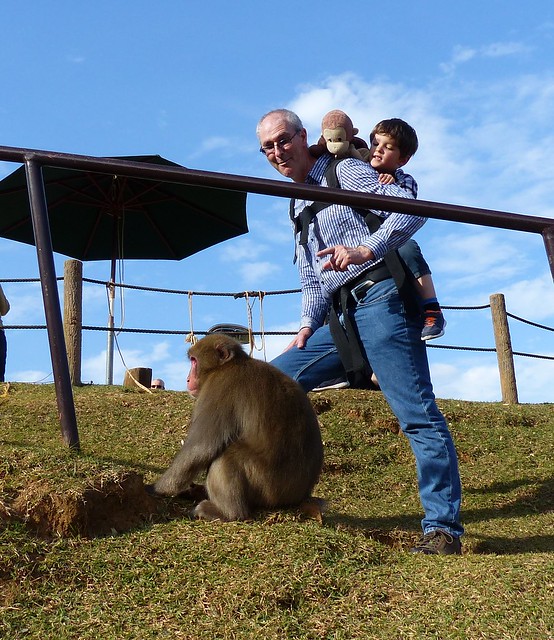 At the monkey reserve it is the humans who go into a cage. But you can feed the monkeys, who stay outside. Eskil and Monkey George fed them some sweet potato. 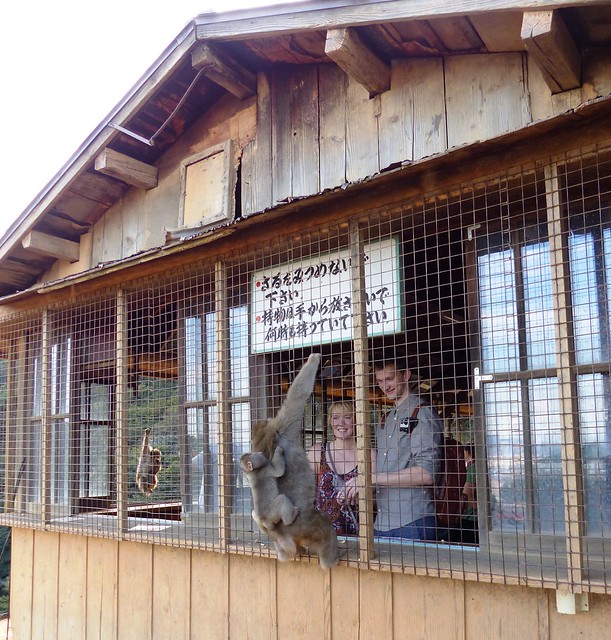 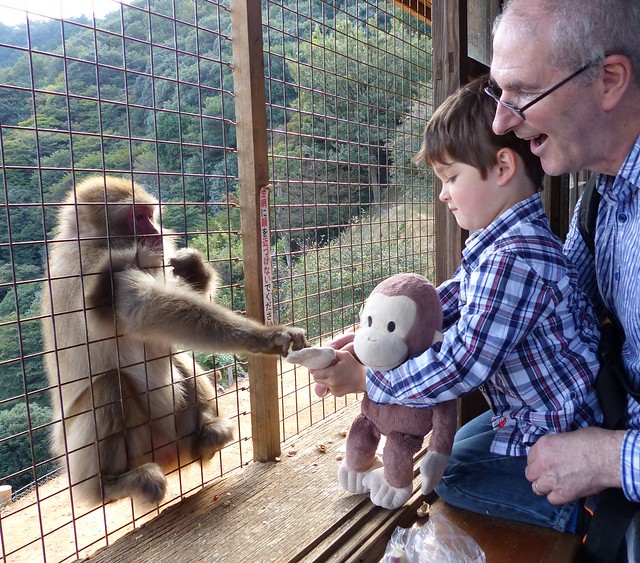 There were some excellent views over Kyoto as well. 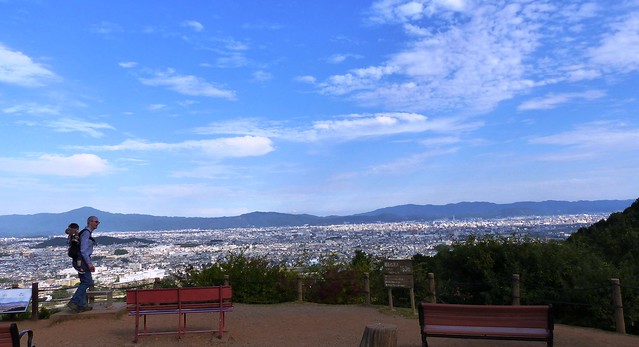 Monkeys everywhere! There are signs telling you not to touch the monkeys, however the monkeys can’t read the sign and come up to touch you. There were a lot of researchers around taking notes, and I wasn’t entirely certain if they were studying the monkeys or studying the people reacting to the monkeys! 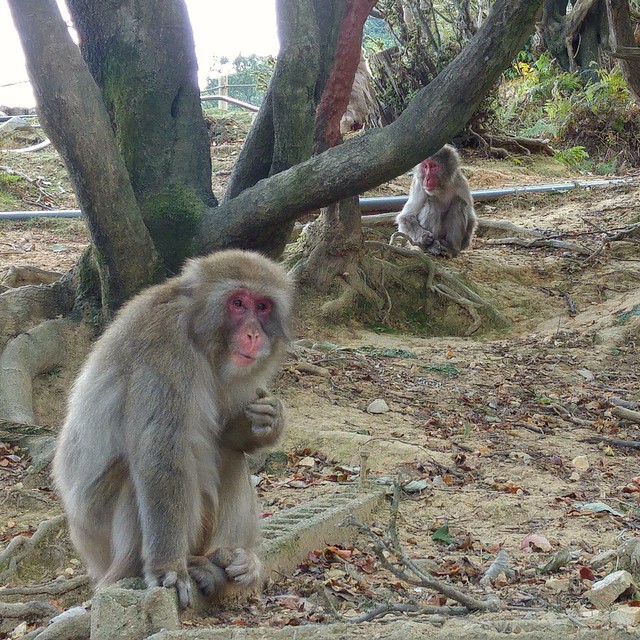 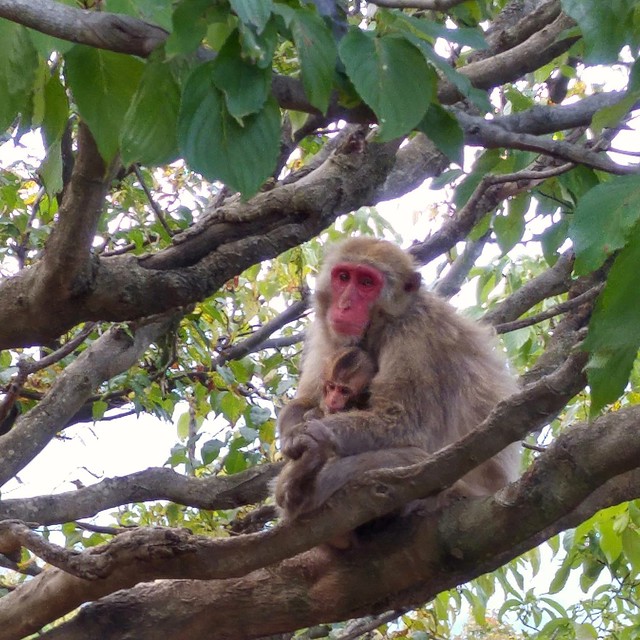 One section had a playground with a slide, swings, and flying fox. I’m not certain if the playground was for the monkeys or humans. As this was on the way out, all the humans of every age slid down the slide, and sometimes the monkeys did as well. Eskil went down the slide several times, and this seemed to upset one monkey who grabbed him by the arm. A researcher yelled at the monkey to go away. 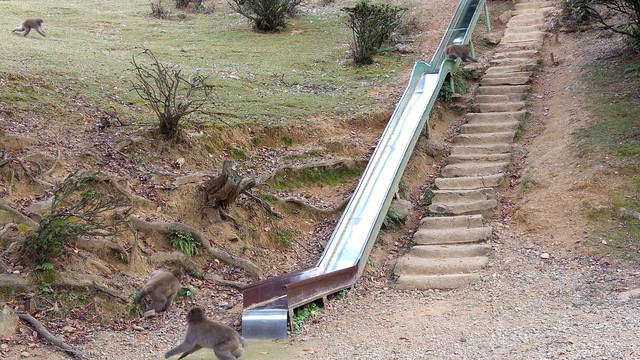 After we left we made our way back across the Togetsuko Bridge and to the bamboo groves. They were quite crowded, but can you blame everyone for wanted to walk through them? 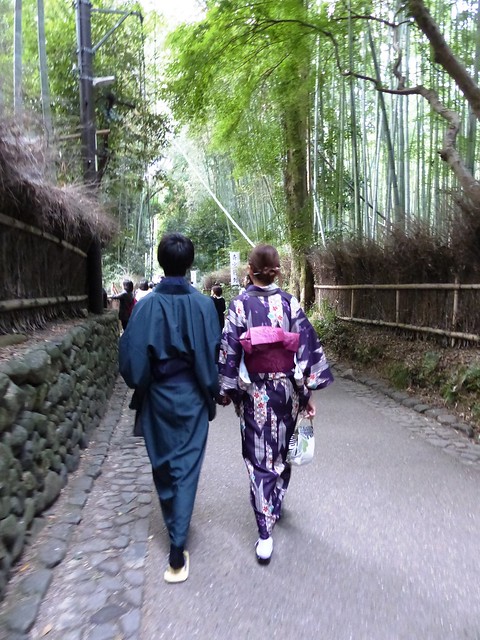 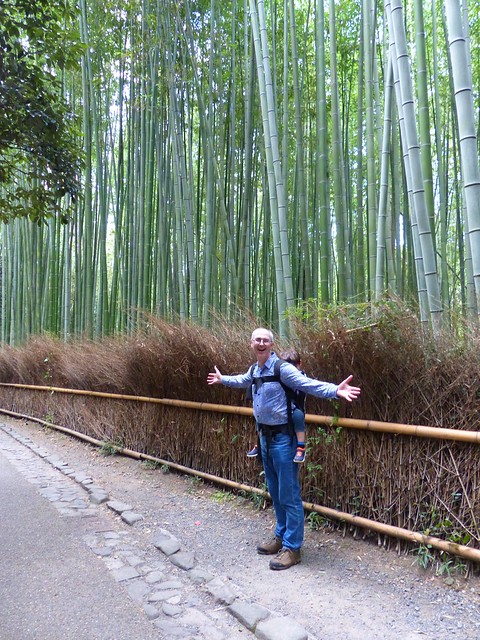 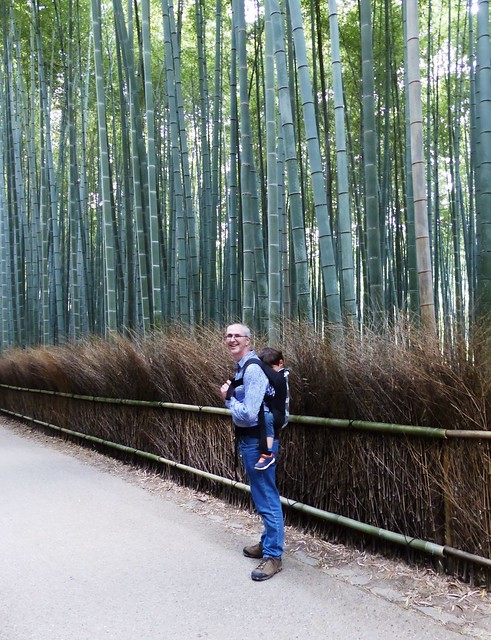 We walked back to the strain station, patted a schnauzer, and made our way back to our neighbourhood. We grabbed some coffee at Starbucks then enjoyed it on the banks of the Kamogawa as we watched the sunset. 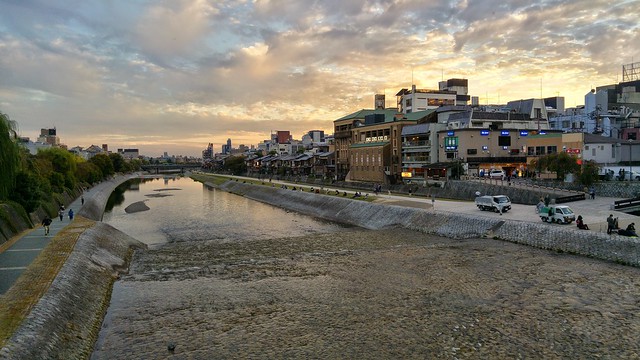 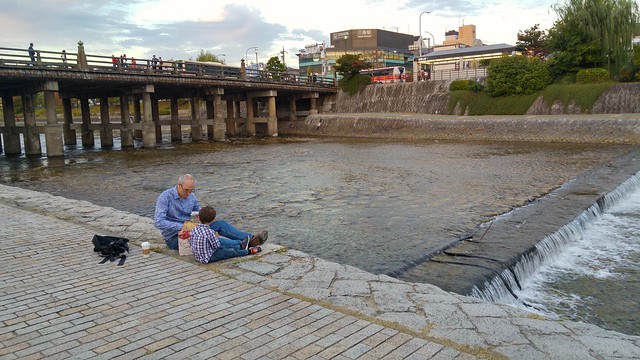 After sunset we found a lovely tempura restaurant for dinner, then walked home. An eventful day!

More photos can be viewed at https://www.flickr.com/photos/cragg-ohlsson/archives/date-taken/2015/10/15/.