Today was a big day: we were renting a car to go to Takachiho Gorge! I happened upon a photo of the gorge while researching Kyushu, and it became the whole reason we stayed at Kumamoto. Hotel staff called for a taxi for us, and we took it to the car rental place. Ugh. We had the ‘usual’ hoo-ha of renting a car – them acting like they’d never rented before, not understanding that we had pre-paid, not understanding that our English version of the contract said certain things were included, etc. Oh well. They were extremely nice about it the whole time, but seriously! Eventually we did leave left with a car, a GPSr we had paid for but was in dispute (but I programmed myself so nahnahnahana), and several origami good luck thingys.

Once we were on the road, it was simple navigating to Takachiho Gorge. We had decided to rent a car for the day as the bus from Kumamoto to Takachiho Gorge would have been close to 3 hours each way – with Eskil on laps. Instead we were comfy in our own car, didn’t arrive at the same time as a heap of other people, Scott can say he’s driven in Japan, and Eskil can say he had a car nap in Japan. 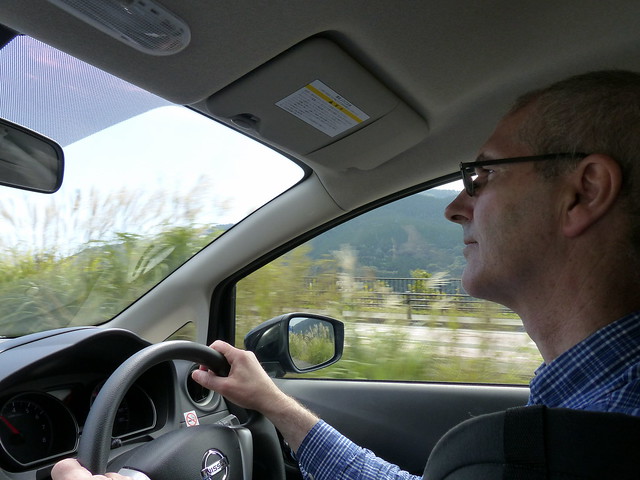 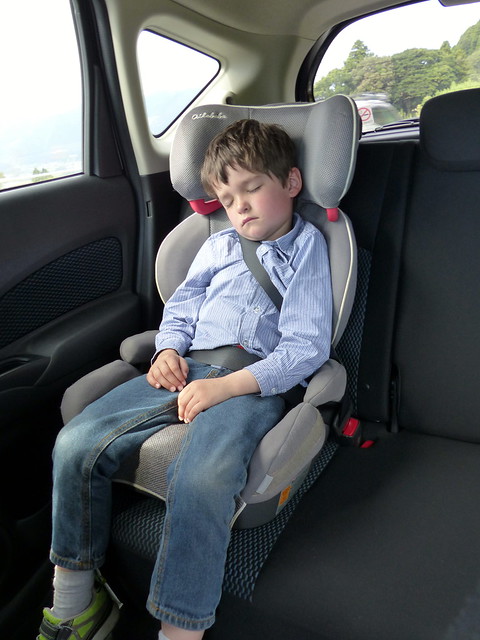 The first part of the drive was very much like Parramatta Road – a long, fairly straight road through industry and outer suburbs. Kumamoto was much larger than we thought! Eventually we were headed into the hills and through some amazing countryside. There were large golden rice fields in the flats, stepped rice fields in the hills, and sharp volcanic mountains!

It wasn’t hard to find the car park for the gorge once we arrived at Takachiho, and we immediately headed down and rented a row boat. Eskil was very proud of his life jacket! 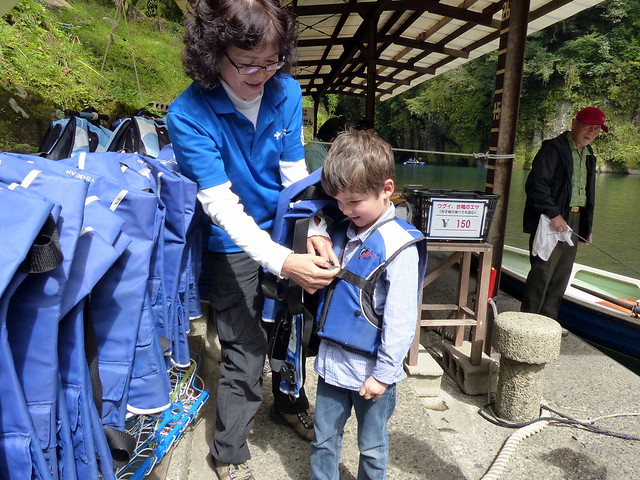 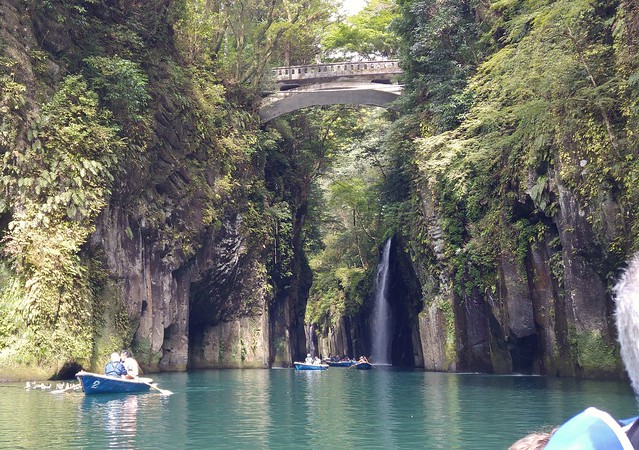 It was fun and very gorgeous. We kinda regretted not getting some duck food for Eskil, but the ducks assumed you had it anyway and followed us closely. As punishment for not having food, one of them nipped Scott’s finger. 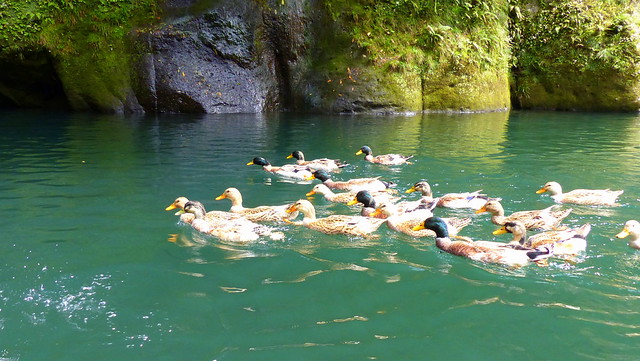 We had the boat for half an hour, and that was plenty of time to row up through the main part of the gorge and back. It was BEAUTIFUL. 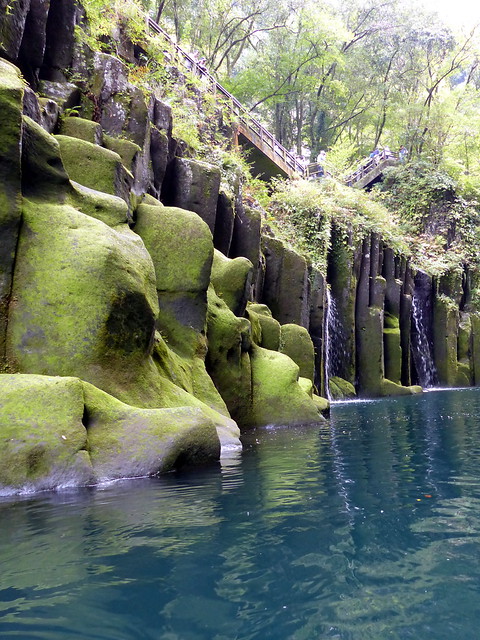 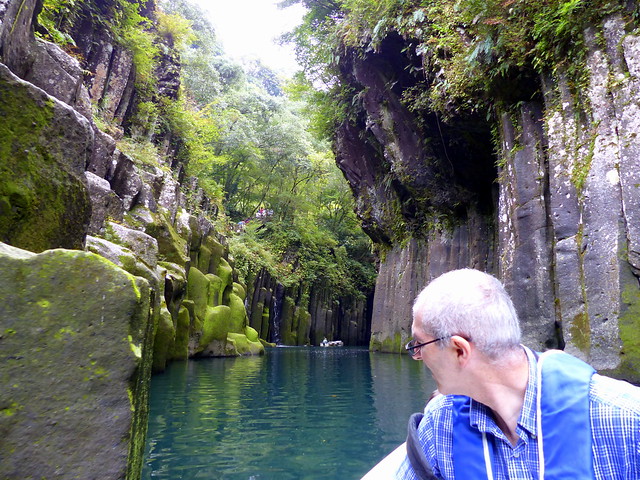 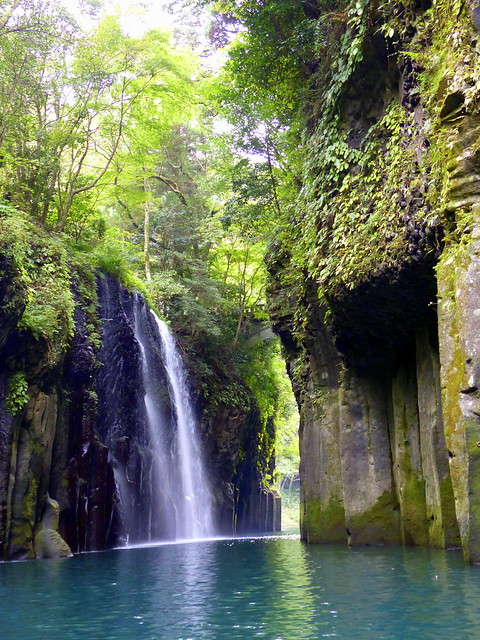 We then walked along the gorge, saw it from the top, and walked further and saw some of the bridges and narrower slot canyons. 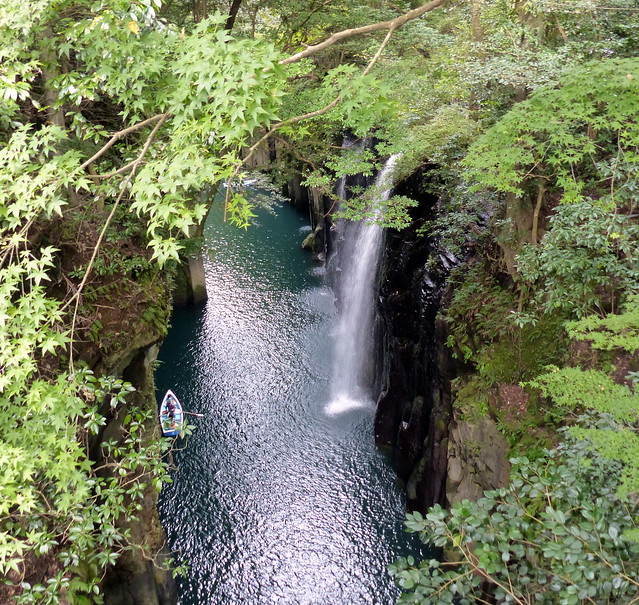 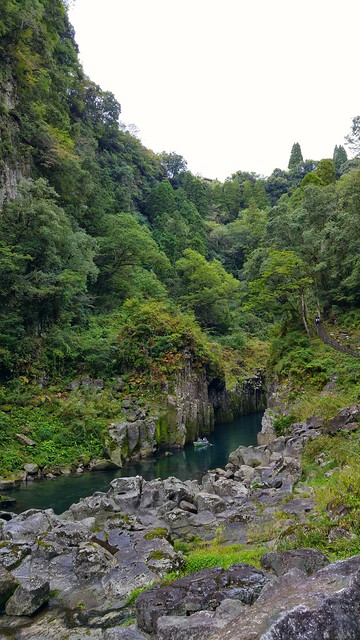 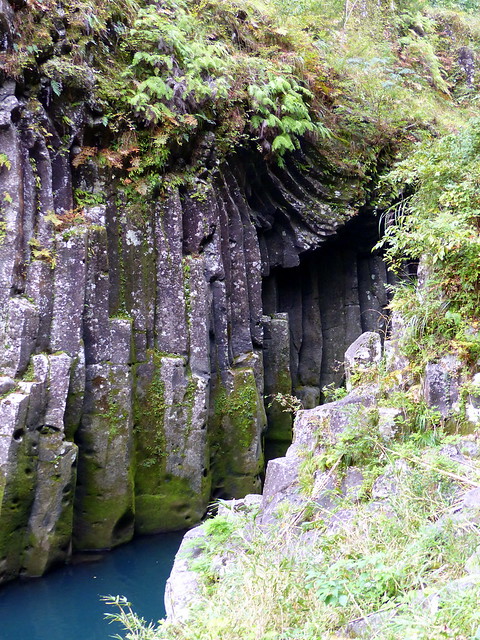 We stopped at a restaurant near one of the bridges for ice cream, then eventually tracked someone down to ask for some lunch as well. We had the yummy cold noodles and some warm noodles with rice balls and pickles. 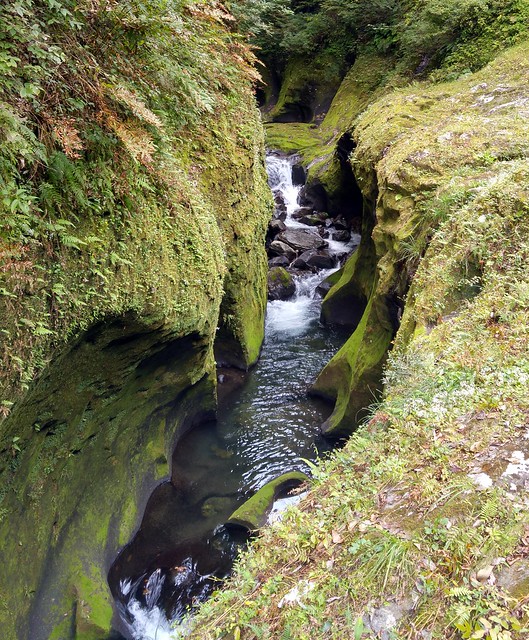 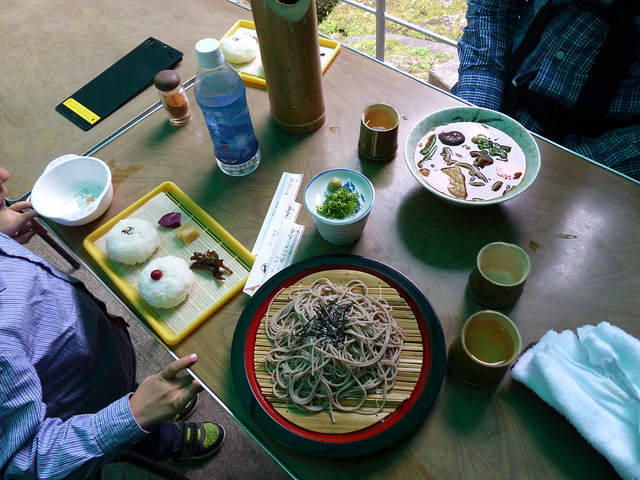 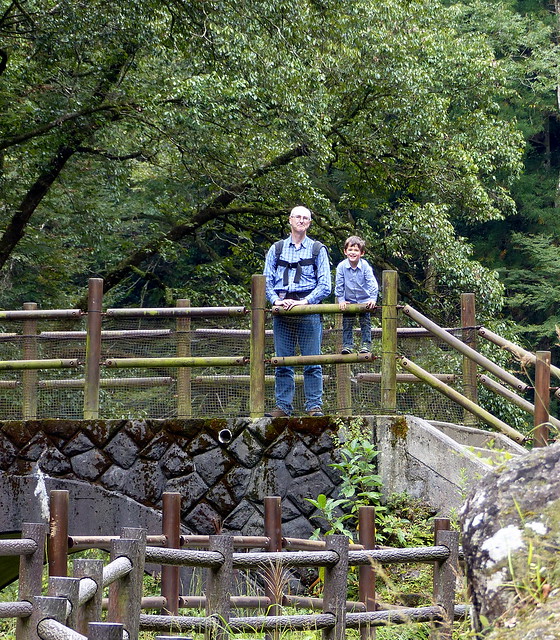 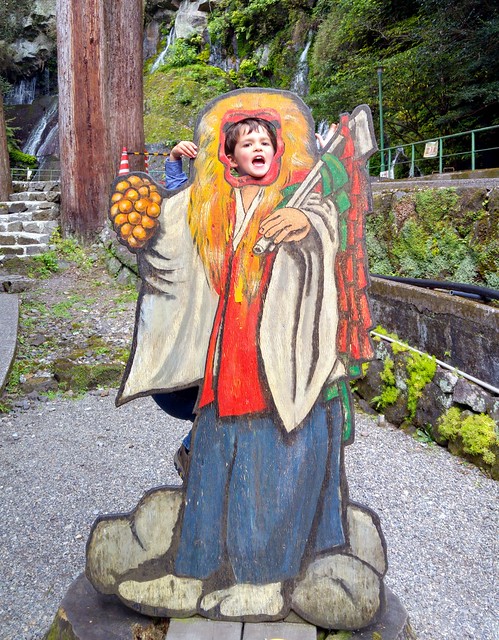 We walked around looking at waterfalls and ponds, then back to the car and drove back to Kumamoto.

We could have tried to drive to some other places, but we didn’t know how long they might take and we’d been to the main place we wanted to go. We decided to get back before the after work traffic started rather than after. We found a Starbucks for a coffee break, then turned the car back in and took a taxi to the tram. 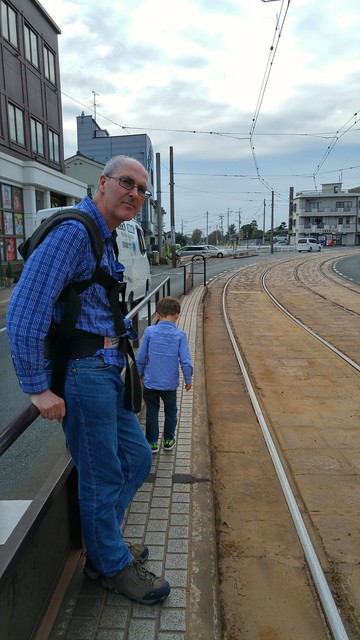 At the tram stop, there was an old man. The tram was an older style with quite a huge step up, so I offered to help him up. IEEEEEE! I think he was offended. But Eskil CHARMED him during our ride to the ginza district, and he was smiling and waved at us when we all got off. We found a small Tokyu Hands and bought Eskil some more self-inking stamps and swipe card holders for Scott and I to use at work. And just generally looked at the stuff. Look Marc and Em – we could create that Japanese bath! 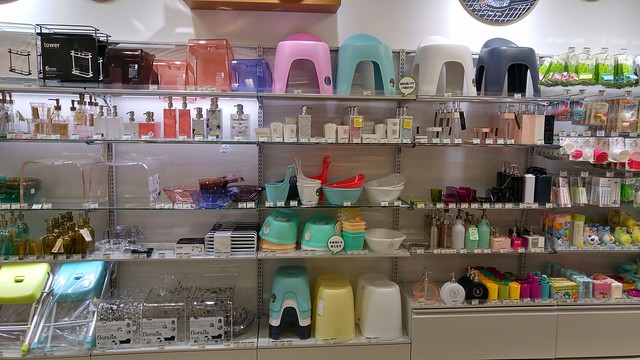 We went to a nice looking restaurant, but we didn’t understand the ordering system so it took FOREVER. The food wasn’t great, and there was smoke drifting around us from our neighbour. As we were leaving, the chef came out to catch a squid from the tank near the till, which Eskil found interesting. Eskil had been grotty and didn’t want to try the food at the restaurant, so we got hot chips for him on the way to the tram. 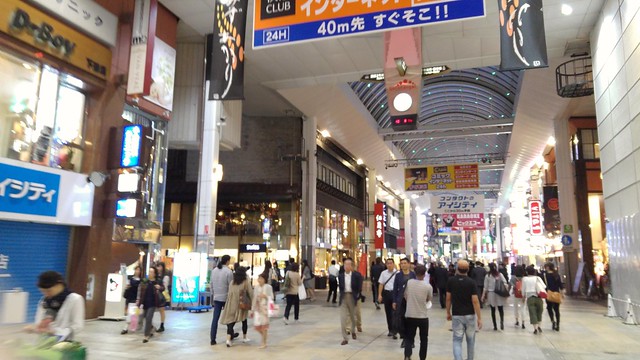 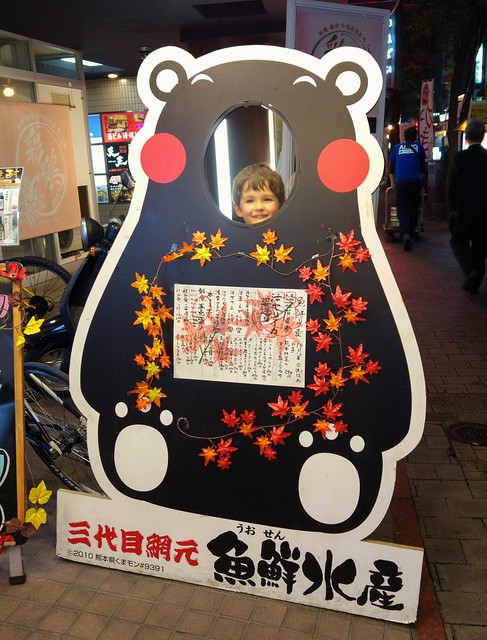 We experienced the VERY noisy birds again, took a very crowded tram to our neighbourhood. Scott and Eskil got off at Hacchobaba, and I got off at the next stop so I could go past the 7-11 for supplies (grapefruit highball, beer, and yogurt for the morning). One advantage to the room getting very warm during the day is that all our socks and undies dried!

More photos can be viewed at https://www.flickr.com/photos/cragg-ohlsson/archives/date-taken/2015/10/08/.