We had another leisurely morning, then again took the hotel’s shuttle bus to Shin Kobe station. Today we took a short day trip to Himeji, so we didn’t bother with seat reservations. I had taken screenshots of a map with Starbucks near the train station (sorry – but when travelling with a youngster they like having something they know for at least one meal), however as it was in a multistory building we had trouble finding it and wound up having coffee and empanadas at Tully. We then walked down the wide main street of Himeji to the castle. The public spaces in Himeji seemed very well designed. They were wide and open at street level with shopping underground. It worked well. There was also parking for cars and bikes under the wide main street between the castle and the train station. I kinda assume at some point a whole block of buildings was cleared to create this wide thoroughfare, but the result was nice and the approach to the castle dramatic. 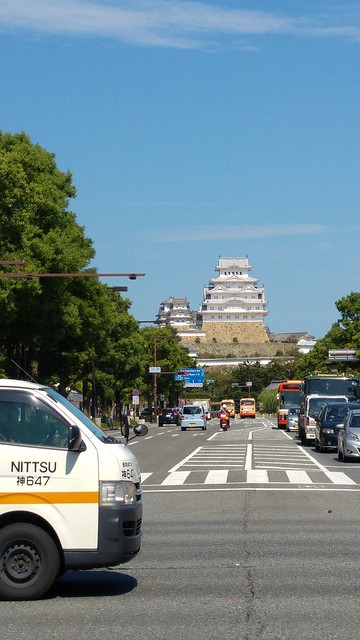 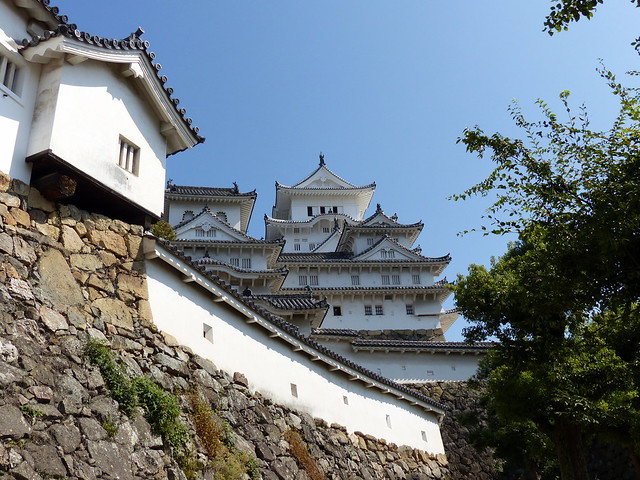 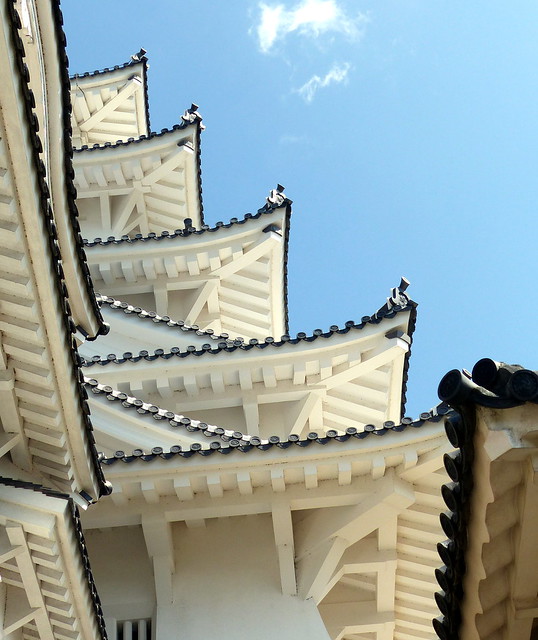 It was HOT at the castle, but we didn’t have to wait in a long queue in the sun. Plus there was a handy fan. 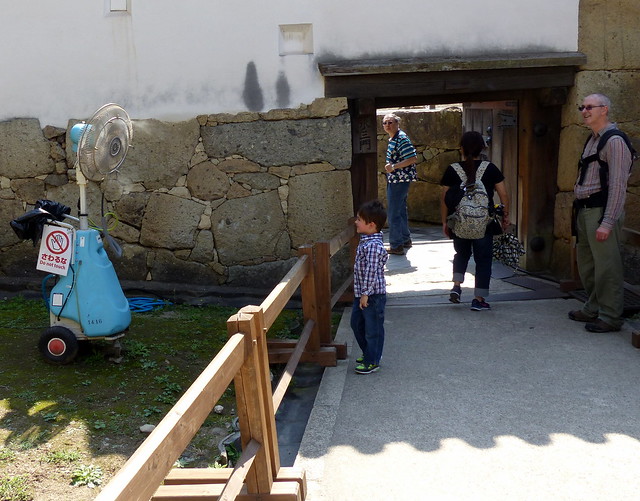 It was crowded going through the castle, although this is understandable as 1) Himeji castle is amazing and 2) renovations to the main keep had been completed only in March so lots of people were having a new look at it. 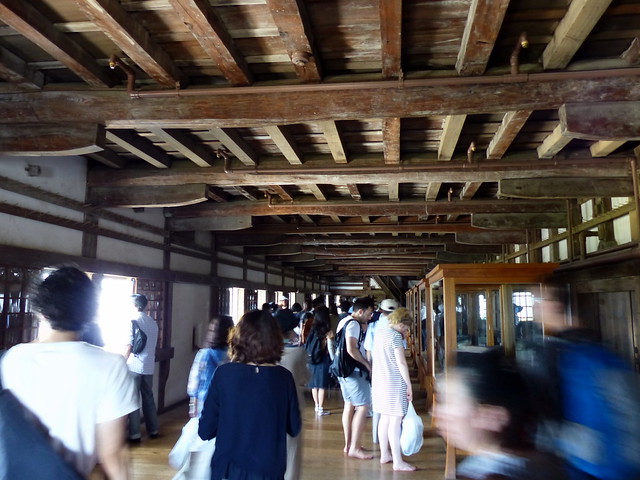 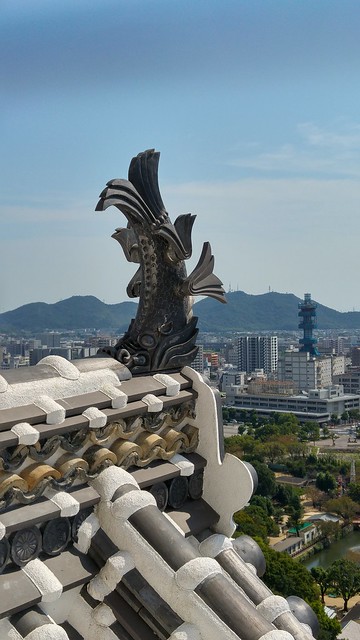 As at Matsumoto, at the entry to the main keep you are given plastic bags for your shoes. Everyone goes through the castle in their socks or bare feet, then as you exit you put your shoes back on and hand back the plastic bag. The bags are then returned to the entry for reuse. It was quite crowded and warm inside, but we eventually made our way up the 8 ladder-like stairs to the top. This wasn’t the narrowest / steepest. They get worse! 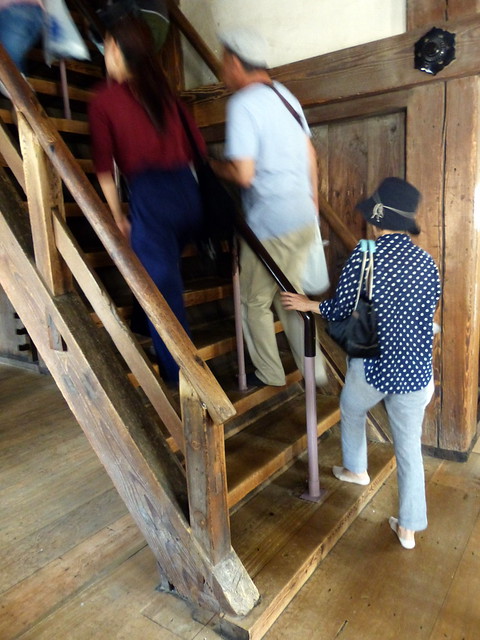 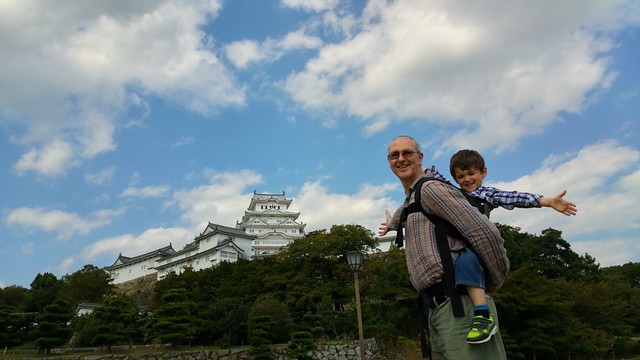 I found the Himeji stamp on our way out, then we headed immediately across the street for ice creams, Pocari Sweat, and water. Scott bought bookmarks. BTW Scott and Eskil always get ice cream cones, then Eskil doesn’t finish his and I have it. The souvenir shopkeeper near where we were sitting laughed at me as by the time Eskil finished his ice cream and gave it to me it was VERY drippy.

We walked back towards the train station. On the way I got an SD card at a 7-11, then we had coffee and a rest in the lovely, air conditioned Starbucks. Then we went back to the 7-11 for evening supplies (i.e. dinner and beer!). We caught the 16:01 train back to Shin Kobe and then the hotel shuttle to the hotel, arriving there just after 5 pm.

We briefly stopped in our hotel room so Eskil could eat some yogurt, then we took up Scott’s excellent suggestion and went up to the cocktail bar on the 29th floor of the hotel. We watched the sun set and had Singapore slings. As the sun set we could see the lights of a Ferris wheel as well as lights on the hillside above Kobe: an anchor and what looked like a tooth? We were the only people in the bar for quite a while, which was probably a good thing as Eskil managed to spill 2 glasses of iced water! As usual in Japan, the wait staff acted as though their day – perhaps their life – wouldn’t have been complete if they hadn’t had a spill from our child to clean up. Two spills completed them. Also Monkey George was trying to sip our drinks, so if we’d stayed longer when others arrived he might have tried to drink theirs as well – or swung from the chandeliers! 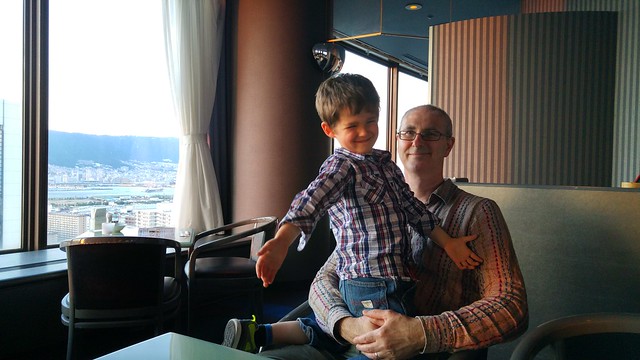 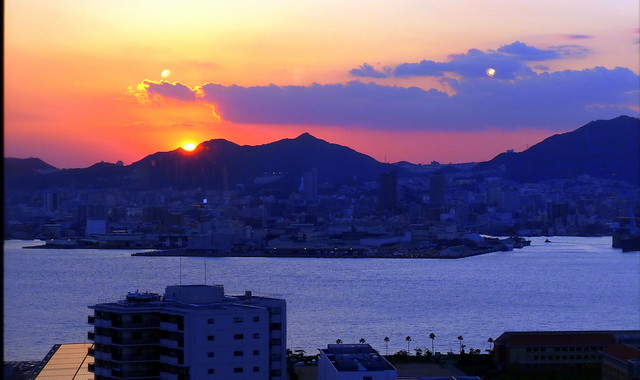 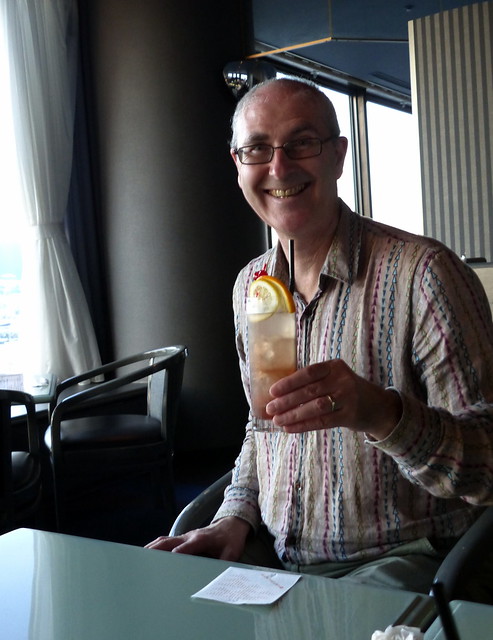 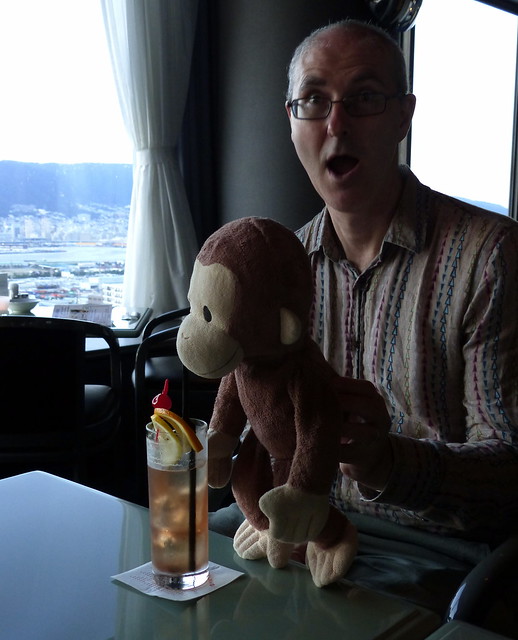 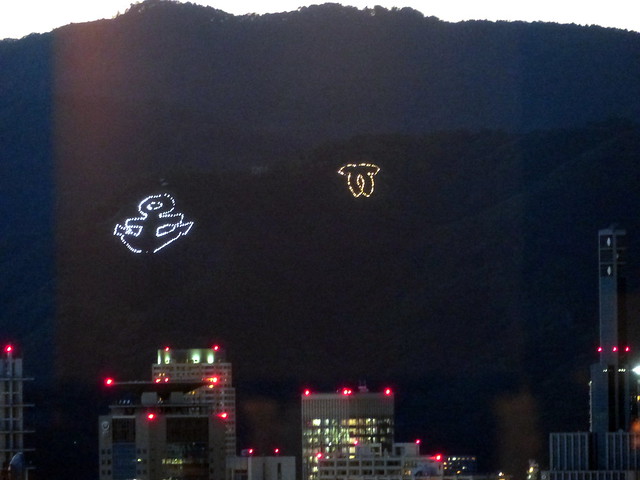 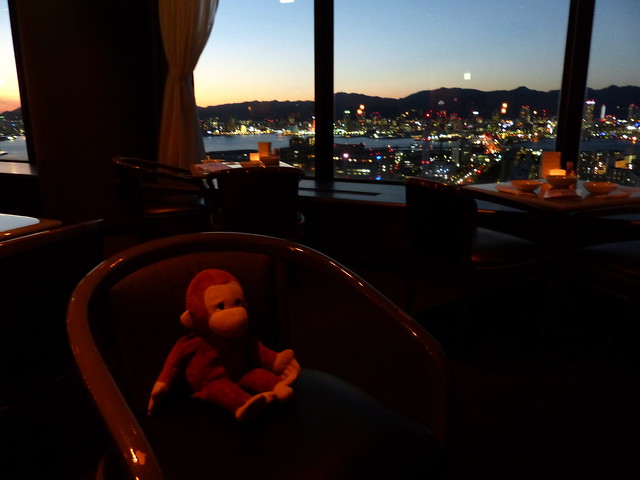 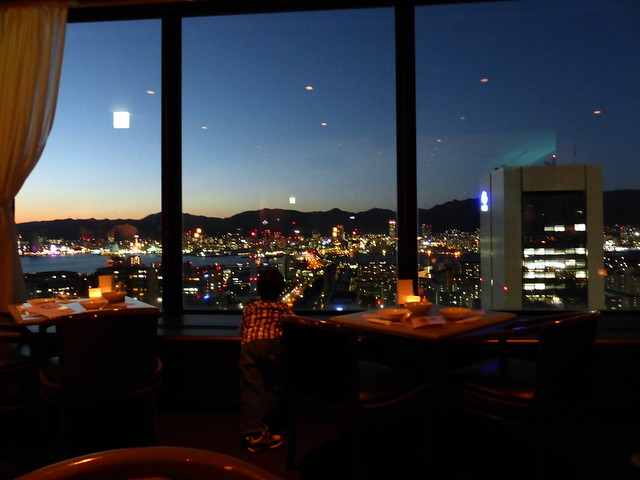 Hmmm. . .eating dinner before having drinks might have been a good idea. Back in our room we had our 7-11 delicacies, Eskil watched strange Japanese TV, Scott read, and I researched the next day.

More photos can be viewed at https://www.flickr.com/photos/cragg-ohlsson/archives/date-taken/2015/09/29/.